‘My message to anyone is if I can do it, they can’, says man who returned to college in his 70s 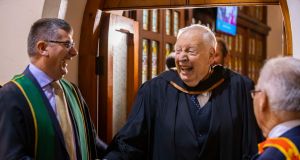 Tom Boyle graduated from Waterford Institute of Technology with a Bachelor of Arts (Honours) in English and Irish on Thursday. Photograph: Patrick Browne

Among the 2,457 graduates at Waterford Institute of Technology this week, 82-year-old Tom Boyle was the proudest of the lot.

“I actually passed first year of UCC in 1959 but left it because of work pressures. I had a few different careers and went to England like everyone else at the time.”

He later worked as a taxi driver for 20 years before deciding to return to education, something that he wishes he had done ten or 20 years ago.

One of Ireland’s oldest full-time undergraduates, he completed his Bachelor of Arts (Honours) degree in English and Irish.

Having initially started his studies at WIT as a law student prior to transferring to arts, he was joined at the ceremony by his wife Phyllis and their seven children.

“My wife was so supportive and so helpful to me, without her help I couldn’t have done it to be honest,” he said.

To make it to his lectures, he set off at ten past six every morning from his home in Ramsgrange, Co Wexford, taking the ferry at Ballyhack village across into Passage East and on towards Waterford city.

“Rural transport is a godsend,” he added. “It was a long old day making it to class and today made it worth it. But even if I didn’t have today it would still be worth it.

“I liked every bit of it,” he added. “It was marvellous actually. You couldn’t be more happy with the setup in Waterford.”

Mr Boyle was praised by WIT president Willie Donnelly for his achievement: “He’s a real inspiration to us all because he’s decided that education is still for him.”

It was in 2016 when he first came to notice, after a video of his classmates singing happy birthday to him as he turned 79 went viral.

He had over half a century more life experience than many of his classmates but he found it made little difference: “They treated me as one of them. The craic was mighty.

“Going on the young people that were there in WIT, this country will be in good hands,” he said.

He thanked WIT for accommodating him, “They were very helpful getting you down on the right path. They were marvellous and fair play.”

For anyone his vintage who may be considering third level education, he said the trick is to “plan well”.

“Let’s be honest about it - there is a lot of reading and writing. But it can be done. My message to anyone is if I can do it, they can.”