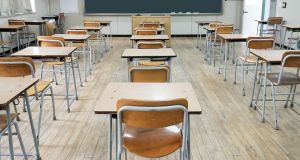 An average of 60,000 children miss school every day, with pupils in urban areas more likely to be absent due to stress and anxiety, according to the State agency which monitor’s school attendance.

Tusla, the child and family agency, has said approximately 12 per cent of the referrals it received about absenteeism last year related to mental health.

According to the body’s most recent absenteeism report, which covered the 2016 and 2017 academic year, Dublin had the highest proportion of students missing school, while Monaghan had the lowest.

“There’s a number of factors in that, I suppose, higher levels of socio-economic disadvantage in those areas, higher levels of unemployment, obviously the family incomes are lower and then allied onto that, you probably have a higher risk of becoming homeless and families moving around,” he said.

“All of those are contributing factors to low school attendance. Ironically, it’s the children from rural areas that have the higher rate of attendance, despite sometimes they would have further to travel to schools.”

Mr O’Shea was speaking at the launch of a campaign to encourage regular school attendance. Some 60,000 children miss school every school day on average, which is approximately 6 per cent of the total school-going population.

This figure includes children who are absent due to illness, holidays, or family bereavement.

The campaign, which will involve more than 1,700 schools running attendance initiatives for the month of November, also coincided with the rebrand of Tusla’s Education Support Service, known as Tess.

Speaking at the event, Fergal Lynch, secretary general of the Department of Children and Youth Affairs, said there are a number of “important emerging needs” that must be addressed to keep children in school.

“We also have an increased commitment by Tess of marginalised groups – people like Travellers, Roma groups, refugees, asylum seekers, all of whom need our help and support.”

Noel Kelly, Director of Tess, said while Ireland has one of the highest school completion rates in the OECD, their work “will never finish until every kid in the country is getting the same opportunities”.

Parents and guardians have a legal obligation to ensure that their child attends a school or else receives an education.

If Tusla considers that a parent is failing in his or her obligation, it must send the parent a school attendance notice, which outlines that legal action will follow if the child does not attend school regularly. If the parent fails to comply with the warning, they may be prosecuted.

In the 2018/2019 academic year, 740 school attendance notices were issued to parents whose children were consistently failing to attend, and 175 court summonses followed.