Was the Leaving Cert harder in the old days?

Girls-only exams, botany tests and imperial measures: the exam has changed radically since the first paper was sat almost 100 years ago 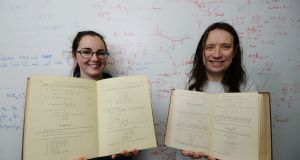 Dr David Malone, a mathematician at Maynooth University, noticed the question posed by a friend on Twitter and he wondered: has our maths education been dumbed down?

Malone dug out a copy of an old Intermediate Cert (the precursor to the Junior Cert) maths paper from the mid-90s, when his friend sat the exam.

“As it turned out, those topics were not on the exam back then, either,” he says. “ We perhaps have a tendency to look at exam questions now through the prism of all we have learned as adults and think it’s too easy. We forget that it is not reflective of who we were as children.”

Malone joined forces with Hazel Murray, a PhD student he is supervising, to look into old Leaving and Junior/Inter Cert papers, primarily in maths and science.

Together, they decided to go back as far as 1925, the first year that State exams were organised by the newly-formed Department of Education.

Murray spent some time in the National Library and Trinity College library in search of old exam papers.

They had never been systematically filed away, and there were particular gaps around the early 1970s and the late 1980s to mid-1990s, when the material shifted to online.

The State Examinations Commission immediately saw the value of the research and were very helpful.

“They invited us down and gave us access to their archives,” says Malone. “This also contains a few gaps, but we were able to give them copies of some of the papers they were missing. A few weeks later, we got an enormous parcel of photocopies from the SEC.”

Malone and Murray wanted to contrast the exam papers from 1925 through to the 1980s with those of the last 20-30 years.

“A 1925 paper consisted of one or two pages, mostly text; now, with graphs and pictures to help explain a question, it could be 20 pages long,” says Murray.

“I think the lack of images might have made it more difficult. The 1925 chemistry paper has so much text on one page that [today’s student] might find it overwhelming, and the questions are vague.

“The 2019 chemistry paper, by contrast, is much more spread out and the spacing between the text makes it more approachable.”

Around the 1970s, there was a gradual shift away from arithmetic to problem solving.

In the early days of the State, the maths exam was once broken into three separate sections taken over two days: arithmetic (where candidates were expected to add pounds, shilling and pence), geometry and algebra.

Of course, free second-level education was only introduced in 1967 so, unless they had an academic scholarship, only children from the wealthiest families could afford secondary school at all.

So do we see a marked change in the approach of examiners from the early 1970s?

“In the 1970s, there does seem to be a spike in the number of pages used in exam scripts, and then a gradual increase into the 1980s,” says Murray.

“By the 1990s, there had been massive change.The old Irish script is phased out of the Irish paper. We also applied maths and biology introduced around the 1970s; previous to this, biology was divided into two courses: botany and physiology & hygiene.”

Scanning the science papers of the last 100 years, meanwhile, reveal the story of our most innovative century – and the gradual purging of British influence from the State.

“It’s all imperial measurements at first but, by 1969, metric is used,” says Malone.

“We see our first question on nuclear physics in 1956, with students asked to write a note on the structure of the atom. Today, a question on the atom might invite students to be more specific about the atom’s nucleus.”

Malone was surprised to discover that, in 1933, the State introduced a “girls-only” maths exam, which lasted into 1968 – but it wasn’t necessarily a sexist segregation tactic. In the late 1920s and early 30s girls didn’t have to do maths – except arithmetic.

“‘Elementary mathematics for girls only’ was seemingly introduced at a time when there was a dearth of good maths teachers in girls’ schools – whereas there were plenty of Christian Brothers schools with a good maths teacher – and an absence of honours candidates for maths,” says Malone.

“The State wanted more girls to take maths but didn’t have the teachers so the exam, which was more basic, was intended to increase uptake.”

In order to get a clearer picture, they have also been collecting old textbooks which, they hope, might give insights into how teachers taught and what students were expected to know.

Both Malone and Murray are cautious of suggesting that the exams have gotten “easier”, pointing out that, on the early exam papers, it could be difficult for students to know what it expected of them.

“We don’t have records of what grades were awarded, or CAO points to compare with today. The marking schemes are also difficult to find before 1998,” Malone says.

“But some of the maths questions could challenge our undergraduates. On the other hand, a student from 1925 might struggle with the amount of statistics on a modern maths paper – statistical understanding that is now necessary for people to understand information in the modern world.”

* Check your own Leaving Cert paper: the archive is available to view for free at: http://archive.maths.nuim.ie/staff/dmalone/StateExamPapers/

Members of the public are also being invited to help source missing papers (marked in red online), along with marking schemes and any memories of the Leaving and Inter Cert exams. Email: david.malone@mu.ie

‘Maths for girls’: Four ways the Leaving Cert has changed in the past century

1. There was no biology course before 1971. Instead, there were two courses, Botany and Physiology & Hygiene.

2. Girls and boys had difference exams. For example, a girls-only maths exam was introduced in the 1930s to try to increase participation of girls in the subject.

3. During the 1940s the subject examiner was listed on the Irish versions of exam papers. They include some well-known names such as Prof Máirín de Valéra (daughter of Éamon de Valera), Cormac Ó Ceallaigh (one of the most distinguished Irish scientists).

4. The traditional Gaelic script – known as An Cló Gaelach – was used for Irish in the Leaving and Inter Cert exams right up until the early 1970s.