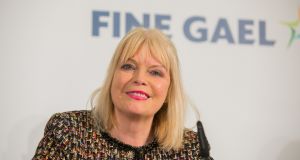 Minister of State for Higher Education Mary Mitchell O’Connor has said she is opposed to any decriminalisation of drugs - be they hard or soft drugs or for personal use or otherwise.

“I do not want to see that happening in our country ever. I attended the funeral of students who died in the summer and I saw the devastation faced by their parents,” she said in response to a question on drug decriminalisation.

Speaking at a Fine Gael election event in Dublin on Monday, the Dún Laoghaire TD said using soft drugs could be a gateway to taking harder drugs.

Taoiseach Leo Varadkar last week admitted that he had smoked cannabis as a student and Ms Mitchell O’Connor was asked about this on Monday given her firm opposition to drug use.

“The Taoiseach was asked a question last week. He gave an honest answer and it was the same answer he gave to Hot Press,” she said.

Mr Varadkar mentioned the 2010 Hot Press interview when he was asked if he had taken drugs during a leaders’ debate on Virgin Media last Wednesday.

When asked in the interview if he had ever experimented with ecstasy or other illegal drugs as a teen, he said: “Not since I’ve held elected office, anyway. I’ve been extremely law-abiding since I’ve been elected to politics.”

Mr Varadkar was asked to elaborate on this the following day and said: “I’m not going to go into any more detail. You know I’m conscious that I’m the Taoiseach... to a certain extent, I’m a little bit of a role model.

“And you know I don’t want to be doing anything or saying anything that in any way promotes drug use or suggests to young people or the students in here that it’s in any way okay so I won’t be saying any more.”

Speaking on Monday, Ms Mitchell O’Connor said: “(Drug-taking) can ruin your life and you can be an innocent person in the wrong place and take the wrong drug and your life is destroyed. I know communities that have been destroyed in the last year.

“The whole problem that we have with drugs on our streets is where is the message for parents?

“All drugs are dangerous. We can’t criticise drug lords if we are half-condoning drug use among students and the middle classes at the weekend.”