Covid-19 response: Has Level 5 been worth the cost? 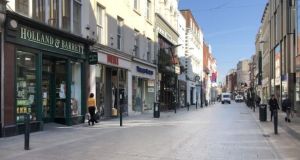 It will be, according to a Government source, “a battle of the spreadsheets”.

For weeks now, teams in at least three Government departments have been poring over reams of data, trying to map and understand the relationships between jobs, health, and coronavirus restrictions.

One source involved in the process says it is about the “economics of epidemiology”. The public debate has been populated with epidemiological and public health measurements – five-, seven- and 14-day incidences, positivity rates, test per million of population, intensive care occupancy and so on. Now, the Government is consciously seeking to broaden the analysis beyond these parameters – establishing “what has the impact been on the economy, and the sectoral impact . . . and has that paid off sufficiently from a public health perspective without disproportionately damaging the economy,” says a source.

At a very high level, this involves combining economic data with public health data, or other health statistics such as information on mortality, in order to better understand the relationships of cause and effect between different parts of the coronavirus response and the economy. So, for example, whether the hit to economic growth is greater than in other countries with a similar number of deaths, or whether the particular nature of Ireland’s multinational-heavy economy influences our performance when comparing economic growth with mortality.

The analysts are also examining data from the Department of Finance’s “nowcasting” models, which expand the traditional frame of economic analysis, where the data tends to lag behind, to include other metrics such as road traffic, payment data, restaurant bookings and mobility data. They also work to examine links between specific coronavirus restrictions and specific economic impacts, including analysing labour market data and figures on exchequer spending and the cost of interventions to support people.

They also analyse measures of how tight Ireland’s lockdown is compared to other countries, and how social and personal mobilities and freedoms have been curtailed, a source said.

This exercise, sources say, is not just intelligence-gathering for its own sake; it is with a purpose. It is driven by concern at high levels of Government that it was left with no counter-argument to the extensive public health data analysis deployed by the National Public Health Emergency Team to support its arguments for lockdown in October.

The results of the exercises have not been published, although sources believe they will be eventually. Notwithstanding that, Government sources believe the modelling supports key parts of their arguments around the latest chapter in Ireland’s coronavirus response – that recent improvements were largely down to household visit restrictions, and that overall, Level 5 has not been worth the cost.