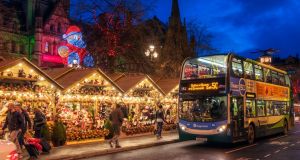 A one-off bus and rail timetable to run services late into the night and the early hours of the morning could be drawn up to facilitate the public to do their Christmas shopping over a longer-span of the day, transport workers have told the Government. Photograph: iStock

A one-off bus and rail timetable to run services late into the night and the early hours of the morning could be drawn up to facilitate the public to do their Christmas shopping over a longer-span of the day, transport workers have told the Government.

In a letter to the Minister for Transport Eamon Ryan, the National Bus and Rail Union (NBRU) said that allowing retail outlets to operate over a longer period of time would make sense not just economically but would also provide smoother and safer access to cities and towns as well as to shopping facilities.

Non-essential retail outlets are set to reopen next week after a six-week closure due to Level 5 Covid-19 restrictions.

In his letter NBRU general secretary Dermot O’Leary said : “We simply cannot afford, or allow for additional retail patronage to attempt to overload buses and trains, potentially leading to confrontation, unnecessarily exposing workers and passengers to Covid-19 and possibly contributing to a phase III surge that would result in further restrictions being imposed upon society in the near future.”

Mr O’Leary said that his union and others had long-standing agreements with the CIE group of public transport companies to operate late night buses and train services over the Christmas period.

“We believe that we can, at short notice, produce a bus and train timetable which will facilitate a longer ’shopping spread’ and assist towards alleviating the expected tsunami of people (commuters) that will venture out to purchase provisions , commodities and presents in attempting to make something out of Christmas 2020.”

“This would facilitate some 24-hour and late night opening of retail in our cities, towns and shopping centres .”

Mr O’Leary said making public tranport available of a longer spread of the day would make good sense from a public health perspectice by lessening the risk of Covid-19 while allowing workers to ean more by facilitating retail outlets to open for longer periods.