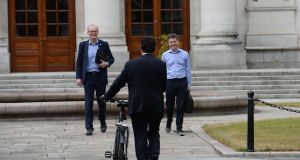 Simon Coveney and Paschal Donohoe greeting Green PAEamon Ryan Leader of the Green Party as he arrives for talks on Government formation at Government BuildingsPhotograph: Alan Betson / The Irish Times

Three months ago, on a chilly St Patrick’s night, the Taoiseach stood inside Government Buildings and asked people to “come together as a nation by staying apart”.

Three months later, on a hot June evening, Leo Varadkar is standing outside Government Buildings, this time asking people to accept politicians coming together as a government while staying apart.

It sounds like the perfect pandemic partnership – another “new normal” to communicate to the country. This time, though, the situation will not spark willing and almost universal buy-in, which is perfectly normal.

Varadkar continued, on that historic night: “This is the calm before the storm.” There was a similar, if less alarming, sense of foreboding about Monday’s historic deal between the leaders of former sworn enemies Fianna Fáil and Fine Gael, with the Green Party also on board to stop the other two killing each other.

The Taoiseach wasn’t contemplating oncoming storms. “This is an historic moment,” he said, and left it at that.

At the same time a large group of Fianna Fáil councillors were mustering to reject the proposed contamination of their great party with “Fyne Gael” types, while fevered objections were expected from some members of the parliamentary party at a socially distanced meeting in Dublin’s convention centre.

“With the size of the hall and the seats so far apart, they’ll be roaring at each other. It’ll be like the panto in there when the likes of Éamon Ó Cuív get going,” predicted one member, thoroughly looking forward to the spectacle.

Meanwhile, the Greens are holding a postal ballot on whether to accept the deal, which seems to deliver on much of their manifesto demands, or stay out of government and the decision-making process. The leadership and negotiating team sounded cautiously optimistic that they would get the majority needed to carry on.

As for Fine Gael, their parliamentary party has been holding regular weekly video meetings – unlike Fianna Fáil, which hasn’t met since the crisis began – so there was confidence the deal would be approved by TDs and Senators.

But it’s a strange affair. The sides that might coalesce in two weeks’ time now talk about having to come to terms with living together, which isn’t always easy. The Taoiseach, about to shack up with a Fianna Fáil – a party from the other side of the tracks – said with a wistful smile: “We’re going to have to learn to work with each other. Trust each other.”

And who knows, they may even grow to love each other in Micheál, Leo and Eamon Ryan’s Formation Nation.

They are strange bedfellows. “We’ve two parties that are medium-sized and one party that’s not really a small party,” explained Varadkar.

This will be the two meat and one veg government: FF, FG and the Greens.

If current popularity were the yardstick (the latest Ipsos MRBI poll in The Irish Times has the current Taoiseach’s party riding high among the voters while the incoming taoiseach’s party continues to plummet in the ratings), Leo would still be No 1.

Not that Fianna Fáil leader Micheál Martin will be too troubled by this. If all goes to plan, he’ll soon have his feet under the taoiseach’s desk after decades of trying, and his mission will be to turn those abysmal figures around from the best platform in the land.

After weeks of negotiations and the usual last-ditch dramatic all-nighters, their programme for government was ready by midday on Monday. It’s called Our Shared Future, which makes it sound like they’re talking about themselves again.

First out of the traps was the Fianna Fáil leader, brimming with bonhomie and struggling to stop himself from smiling too much. He did his trademark brisk sideways scuttle through the gates and into Merrion Street, the document under his arm.

It was bound in blue. What shade of blue? Well, maybe lighter than the shade of purplish blue some of his foot soldiers are turning.

Some people thought the increased noise in the city on Monday morning was a sign of the gradual return to some semblance of normality after the coronavirus lockdown, but it was the sound of De Valera and countless more revered Soldiers of Destiny spinning in their graves.

Micheál Martin had the good suit on, and it was hard not to spot the good shoes, mirror-shined at the toes. “Happy with the final document,” he said, setting the tone for what his two fellow partners in government would say later on. The next step was to discuss it with his parliamentary party.

Looking forward to the new job? Is he going to be taoiseach?

He went all bashful. “That will all be revealed later on in terms of … eh ...” he smiled.

And he scuttled on. Happy out.

Much later in the day, Varadkar said the spoils – sorry, jobs – hadn’t been divided between the parties yet. You could see he was a little sad to be leaving the office.

Was he happy enough to see his job going to the Fianna Fáil leader?

Leo put on a brave face, something he isn’t good at.

“Yeah,” he smiled, rocking back on his heels. “I am.” But then, “this isn’t about me”, it’s about forming a stable government. He took a sharp intake of breath. “Anybody leaving the taoiseach’s office is obviously going to feel a certain tinge of regret about that.”

At least he can take his “Mr Taoiseach” Mister Men mug with him when he moves to his new ministerial office, and he can wrap it up carefully for when his turn comes again in 2½ years’ time. In the meantime, he can get a new “Mr Tánaiste” mug.

But will he want to be taoiseach again? Maybe other dizzy heights will be beckoning by then. Maybe Simon Coveney could get the second-half gig instead.

When he was asked about getting back into the top job as part of the deal, he replied: “You know, anybody who thinks they can predict what’s gonna happen in politics in a year’s time, in two years’, three years’ time is a very brave person ... Nobody knows for sure what the future holds, but I think we’ll be up to the challenge.”

And so to Eamon Ryan, who had his ups and downs last week but has come out the other end with a deal some commentators have dubbed “The Green Deal” and describe as a very good outcome for his party from the negotiations.

What was different from the last time, when the Greens negotiated themselves into government with Fianna Fáil? That didn’t go too well.

“Experience – you know the way it works,” said Eamon, who managed to escape the midday media throng by leaving Government Buildings by a different exit. He went to Marks & Spencer and bought his lunch and some socks.

Were the negotiations so time-consuming he didn’t have time to find clean socks? “No, I have three sons. You wouldn’t believe the amount of socks we go through.” To him, walking away was never going to be an option.

“This is the job we are all elected to do. It’s our duty. We had to come up with something. It’s what, as politicians, we do.”

And then, if it doesn’t happen, there is always opposition. And that opposition was out very quickly on to the plinth on Monday afternoon. Mary Lou McDonald had five senior TDs arranged behind her like pieces on a chessboard.

She promised the “most effective and coherent opposition in the history of the State”. She means business, too. The Dáil may yet be lifted from its slumber before the summer recess comes along.

Back in Government Buildings, the Taoiseach and Tánaiste gave their briefing without the usual props. No flags, no fancy lectern and no slick branding for the document. No scripts either.