Miriam Lord: Pods for politicians could be the perfect solution 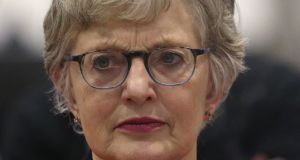 Katherine Zappone: Many TDs thanked her for her work during her term of office

“Aah, sod this for a game of soldiers. The sun is shining and there’s a cold drink waitin’ with my name on it. I’m outta here!”

And with a devil-may-care smile and a dismissive wave of her hand, the Minister for Children and Youth Affairs gathered up her files and sashayed from the plague-ridden Dáil chamber, never to return.

Katherine Zappone, who lost her seat in the general election but retains her Cabinet portfolio until a new government is formed, was in the House for an afternoon session on her department’s response to the Covid-19 crisis. She made an opening statement and then took almost two hours of questions from the floor.

Many TDs thanked her for her work during her term of office before getting stuck into the Government’s handling of promises to put childcare support in place for working parents during the pandemic, particularly in the area of essential workers.

“It has been very difficult for Ministers who lost their seats, so I thank you very much” said Fine Gael’s Frankie Feighan. “Thank you for your vocation and your political and social leadership. You have been a vision for equality and social change, and you have fought hard to reduce poverty.”

Kerry Independent Michael Healy-Rae praised the now former TD for Dublin South West for turning up to take their questions. “It would have been very easy for you to walk away.”

While standing up for her department and her record, there was a more relaxed and less guarded air about the Minister. Partly because she could answer questions about Government plans in the sure knowledge that she won’t be the one having to defend its actions down the line.

When Socialist Paul Murphy talked about the possibility of private clinics operating from the new national children’s hospital, he asked if she agreed all facilities should be available to every child on the basis of need and not on the basis of their parents’ wealth or income.

“Well said!” replied Zappone, a reaction you wouldn’t expect to hear if she was still in the hunt for more Cabinet duty. “I will respond to that by saying my hope is that the next government, all Deputies and Senators, will push harder to ensure the rolling out of Sláintecare.”

There was just one moment when the Minister with no seat showed a flash of irritation. Independent Verona Murphy accused her department of failing to provide adequate guidance to childcare providers on preparing for the reopening of the economy. The Government needed to “show a real sense of urgency” if parents were to get back to work.

She asked the Minister “to undertake in the next week to provide a clear protocol and set of guidelines to the childcare sector that guarantees a strategy for reopening and will ensure the health and safety for all involved”.

Zappone couldn’t oblige. “I can guarantee that we will have a protocol and clear guidelines. I don’t think it’ll happen in the next week, though.”

However, she assured the first-time TD that the childcare problem was one of her “key things”, and she was working on it now with officials ahead of a wider consultation process.

But Verona wanted to be sure, following up with a doubtful smile and a frustrated laugh.

“Can you note the urgency, minister?” she called down to the Government benches.

You could sense Zappone stiffening in her seat.

“I never stop working on that,” she replied in clipped, even tones. “And I’m unelected”

Two hours later, and it was Regina Doherty’s chance to tell her former TD colleagues to stick their questions where the sun don’t shine, flouncing out the door and away from the demands of office forever.

But she stayed the pace too, also picking up plaudits as she dutifully worked her way through her two hours of questions.

There was a particularly generous tribute from Labour’s Ged Nash, who expressed his gratitude to the Minister for Social Protection for her work in enacting his Employment Miscellaneous Provisions Act, providing improved security and conditions for workers in precarious employment.

“It will be an enormous legacy that you can be proud of,” he told a beaming Regina. “I’m sorry that you weren’t re-elected. I hope if you chose to stand in an election again that you might, in fact, be elected.”

The Minister was positively blushing as this stage.

“I know what it’s like to lose a seat and to win one back. It’s a difficult business, a difficult profession, but it’s a human business, and I want to pay tribute to you on a personal and professional level and thank you for the work that you did.

“We didn’t always agree, but I think we worked well together to try to achieve a common objective.”

Ged’s gracious words provided a welcome break from the quick-fire nature of the exchanges – Dáil business these days is broken into a series of strictly timed Q & A sessions fronted by a rotating cast of Ministers and TDs who must scuttle in and scurry out to ensure that the correct social distancing procedure is observed.

Zappone’s segment was conducted at breakneck speed by Catherine Connolly, who was in the Chair. The independent TD for Galway West was most apologetic for having to hurry everyone along, but speakers are being rigorously policed to make sure everyone sticks to their allotted times, although these slots can be subdivided among party colleagues.

Fianna Fáil’s Anne Rabbitte announced she would be in possession for nine minutes, with colleagues Micheál Moynihan and Aindrias Moynihan getting three minutes each. “So it’s nine, three and three,” she said breathlessly. “I’m going to do rapid fire, questions over and back” if that’s okay.”

She rattled out the questions and a flustered Zappone tried to rattle back the answers. Rabbitte managed to get in at least eight queries in her allotted time. It was so exhausting we couldn’t remember the questions.

Meanwhile, a compromise to the latest very strict health guidelines on Dáil sittings may be in sight. TDs were shocked on Tuesday to learn that that no two people should spend a cumulative period of more than two hours in the same room in any 24-hour period.

Bit over the top, they thought. It’ll never work, but how can they ignore medical advice? The Dáil chamber may qualify as a room but this is taking catch-all politics to a new level.

Perhaps the statement from Zappone on Wednesday on the reopening of crèches holds the key. It could be adapted for Leinster House by simply substituting “childcare” with “politics” and “children” with “politicians”.

“Our preliminary guidance is pointing towards preparations whereby politics will operate in pods. As far as possible, this will entail small groups of politicians with the same politics practitioner in the same room with the same toys every time they are there.

“We are exploring the number of politicians that could be cared for by a single politics practitioner. They will play together and will be encouraged to stay together in their pods and use outdoor spaces as much as possible.”

1 Luke ‘Ming’ Flanagan bares his bottom half to European Parliament
2 Miriam Lord: Not a bare ankle, hairy knee or a Ming the Trouserless to be seen at Covid committee
3 Over 200 contracted Covid-19 while in hospital for other conditions
4 Trump turns to bible for photo op as DC burns around him
5 Programme for government must include 'fiscal responsibility' – Varadkar
Real news has value SUBSCRIBE