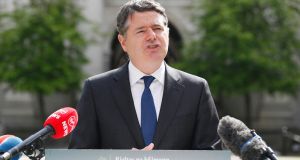 Paschal Donohoe: warned that the Government would face demands to increase regular job seekers’ benefits up to the level of the weekly Covid-19 unemployment payments. Photograph: Leon Farrell/Photocall Ireland/PA Wire

A significant minority of people in receipt of the €350 pandemic unemployment payment were paid less than €300 a week before the payment was introduced, a Government report has said, as questions continue about the future of the payment.

The report, compiled by the Department of Business, raises concerns about “significant disincentive effects associated with the pandemic unemployment payment with 38 per cent of recipients previously earning less than €300 per week”.

With almost 600,000 people receiving the special payment, it means that over 200,000 people are better off unemployed than they were while working. That number includes many people who were working part-time in the hospitality industry.

Although there are growing worries in Government about the sustainability of the payment, Ministers are likely to extend the special payment over summer, declining to either signal a firm end date or to close the scheme, according to sources familiar with the discussions on the topic.

Yesterday, the Minister for Finance Paschal Donohoe warned that the Government would face demands to increase regular job seekers’ benefits up to the level of the weekly Covid-19 unemployment payments if these were to be maintained at the current rates until the end of the year.

At present people who were unemployed prior to the current coronavirus crisis receive jobseekers’ benefit of €203 per week. However those who lost their jobs on foot of Covid-19 receive a special pandemic unemployment payment of €350 per week.

There is a general belief among Ministers that the €350 a week payment cannot continue indefinitely. But there is no consensus on how to bring it to an end.

Yesterday, Mr Donohoe said if the Government was to continue paying the special Covid-19 pandemic unemployment payment at the current levels until the end of the year as had been suggested, it would then face “an understandable issue” in which citizens who were unemployed prior to the current crisis would ask why their jobseeker benefits were so much lower.

Mr Donohoe’s forecast of demands for unemployment benefit equality came as the Government faced calls to extend the separate special weekly € 350 payment for those with confirmed or suspected Covid-19 infection to cancer patients who were cocooning.

The Irish Cancer Society said on Wednesday cocooning cancer patients “must have fair access to pandemic illness payments so they do not feel forced to risk an unsafe return to work”.

The group said it was unfair that cancer patients who were unable to return to work because they are cocooning could not access the payment.