Back in their expensively refurbished Upper House, the talk was still resolutely cheap 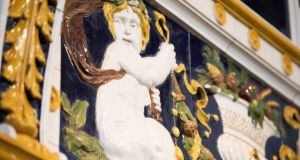 Following two years of renovation work on the chamber, its gilded occupants were finally allowed back, leaving behind their temporary lodgings in the Ceramics Room of the National Museum where plumptious yellow-haired cherubs – the spit of Donald Trump – decorated the walls. Photograph: Tom Honan for The Irish Times.

The Seanad returned on Tuesday after the summer recess to a beautifully refurbished chamber.

The Senators, neither refurbished nor reconstructed, returned to the deafening indifference of a grateful nation.

No sign of the Yokohama Four when the Cathaoirleach, Denis O’Donovan, welcomed everyone back for the new session. The quartet of Government Senators – Neale Richmond, Maria Byrne, Catherine Noone and Tony Lawlor – who went to Japan with the Oireachtas rugby team (at their own expense) failed to make it back for the afternoon opener.

It was a special day. Following two years of renovation work on the chamber, its gilded occupants were finally allowed back, leaving behind their temporary lodgings in the Ceramics Room of the National Museum where plumptious yellow-haired cherubs – the spit of Donald Trump – decorated the walls.

Marie-Louise O’Donnell doesn’t like the main front entrance. “It reminds me of a funereal door into a very modern undertakers.”

This being the Upper House, where the members can talk about whatever they like at their daily Order of Business wafflathon, they had much to say about their sympathetically restored surroundings.

“I invested in a pair of hearing aids because I could hear nothing whatsoever over in the other place,” said Fianna Fáil’s Ned O’Sullivan. “I think I’ll have to give them back now.”

And what about the chandeliers?

“Quite lovely,” exclaimed David Norris. Though he said he isn’t so keen on the “mustardy” colour on the walls.

The Cathaoirleach led the congratulations to the OPW and main contractors Duggan Bros on the quality of the work, which is very impressive. It moved Denis to verse as he admired his sparkling surroundings, resplendent in heritage colours similar to what guests would have seen in the Leinster House ballroom in 1748.

“It brings to mind a quotation – I’m not sure whether it was Thackeray or Goethe – my father taught me around the fireside in west Cork as a child,” he sighed.

Do I wonder in doubt?

Are things as they seem?

Or are there visions about?”

You wouldn’t get that in the Dáil.

Marie-Louise O’Donnell thought Senators might draw inspiration from their surroundings. “I hope our intellectual prowess and argument can parallel it.”

And while she was delighted with how the chamber looks, she doesn’t like the main front entrance. “It reminds me of a funereal door into a very modern undertakers.” The “clink and the clitch” of the old mahogany one is gone.

She has written to the authorities about this.

Any notion that the quality of debate might soar under the gold, crystal and ornate plasterwork of the barrel-vaulted ceiling was quickly dismissed when Lorraine Clifford-Lee, opening for Fianna Fáil, took an immediate swipe at Fine Gael’s Senators on “an extended holiday to the Rugby World Cup”.

She then proceeded to deliver a party political broadcast on behalf of Fianna Fáil. Some people, she said, are annoyed by their “sensible and pragmatic” approach to the forthcoming budget which is being framed in the shadow of Brexit.

“We put the country first and foremost.”

“Yahoo! Put that in your pipe and smoke it!” chortled Terry Leyden at Leader of the Seanad Jerry Buttimer, from the safety of numbers in Fianna Fáil’s crowded intellectual wing.

Sinn Féin’s Rose Conway-Walsh moved onto the British supreme court’s decision on Boris Johnson’s prorogation of the Westminster parliament (unlawful). “It is also astonishing in that the British prime minister forced the British queen to act unlawfully.”

“He didn’t use force,” insisted Marie-Louise, as Norris giggled at Sinn Féin’s concern over the queen.

Fianna Fáil is not wearing the green jersey to Rose’s satisfaction.

The political parties need to put on a united Brexit front.

Clifford-Lee squawked out a protest.

The Sinn Féin Senator was determined to have her say. “I am not going to sit here and listen to Fianna Fáil putting the country first,” she bellowed, from a standing position, before bringing up “the golden circle, the Galway tent and the corrupt bankers” and various other Fianna Fáil ignominies from the Celtic Tiger era.

“We were not robbing banks.”

Then Rose veered off into problems with the beef industry. A subject raised by a number of Senators, along with the fate of Lyric FM.

Michael McDowell made an impassioned pitch on behalf of RTÉ’s classical music station. Its future is in doubt. Lyric should be preserved and, if some sacrifice in service is needed, 2FM should get the chop.

McDowell also wanted more speaking time for members contributing to a later debate on the reform of the Seanad. Instead of the allotted six minutes each, Senators should have 12 minutes to make their points on such an important topic as saving their own bacon.

The chair acceded to his request. McDowell also thinks Ministers are given too much speaking time. “If you go back to Senator [WB] Yeats’s speech about “we are no petty people”, under our speaking rules he would have got about a quarter of the way through before being told to sit down. We have to be slightly more generous to ourselves.”

Try telling that to Charlie Flanagan who has to sit through senior counsel Michael’s interminable meanderings on the judicial reform Bill.

A case of the filibustering pot calling the ministerial kettle black.

Gerry Horkan (FF) brought up climate change. And the cost of insurance.

Paul Coghlan (FG) said the House should invite the Attorney General in to talk about the consequences of the supreme court decision in London so the Senators “can tease out” the problems this may present.

Ned O’Sullivan had a row with Sinn Féin over respective party finances (“dodgy money”) while Sinn Féin’s Máire Devine though the Seanad should invite Greta Thunberg to address the House.

There was mention of compensating the owners of badly built apartments (Kevin Humphries, Labour), the “lawlessness” of the Public Services Card (Devine), the gender pay gap (Jennifer Murnane-O’Connor, FF) and the possibility of appointing a minister for women; the quality of school meals (Colm Burke, FG) and votes in presidential elections for the diaspora (Niall Ó Donnghaile, SF).

“The mink have killed nearly all the swans on the Castlebar lake.”

Almost to a man and woman (Independents Norris and McDowell excepted, along with the party leaders), Senators left the chamber when they made their contribution.

One for your diary: they will be discussing the beef crisis next Thursday.