Miriam Lord: No fighting cocks at the ploughing but plenty of cowboy hats 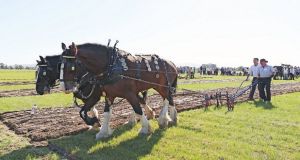 Which way to The Ploughing?

“Turn right and follow the signpost for the Fighting Cocks.”

This sounded promising. The organisers must have had high hopes for Thursday’s simultaneous visits to Carlow by reigning Taoiseach Leo Varadkar and the number one contender for his job, Micheál Martin.

Those of us who were there for the politics and not the poultry were most encouraged. You really have to leave the environs of Leinster House to find any political drama these days. With any luck, the two political peacocks strutting their stuff in the showgrounds might collide in the crowd and start tearing lumps out of each by lunchtime.

By coincidence, Fighting Cocks is also a townland near Fenagh, where the National Ploughing Championships and agricultural extravaganza was held this year. Huge crowds yet again on the last day, sun blazing down on the whole glorious enterprise and a mighty success for all concerned.

On the roads into the grounds, another political contest was flagged. This is the battle for the Presidency of the Irish Farmers Association. Among the election posters sprouting from the ditches was one which read: “Tim Cullinan for President. I will put the fight back in IFA to deliver for farmers.”

Steady on, Tim. Unlike beef, fight is one commodity which isn’t in short supply among Irish farmers.

Due to the ongoing difficulties in the beef sector, the Minister for Agriculture was on site bright and early to do his media appearances. He didn’t stick around. Probably a wise move, from a health and safety perspective.

Well in advance of the Taoiseach’s arrival, his people contacted the National Ploughing Association with a couple of queries. The first one, we understand, was a simply query: will there be any trouble?

Assurances were given. Leo remained unmolested.

The second question centred on food. What was planned for lunch? When VIP visitors arrive at headquarters, they are stood a hearty lunch by the leading lights of the Ploughing Championships. When President Higgins was entertained on Monday after performing the official opening, he sat down to a choice of honey glazed ham, fillet of beef or hake, all accompanied by a bolster of vegetables.

Grazing on a cold buffet

On Wednesday, instructions were conveyed from the Taoiseach’s end that he would prefer “something light”. So while his fellow diners tucked into the meat and two veg, Leo was grazing on a cold buffet.

Conclusively proving that the Taoiseach is a man who does not eat his dinner in the middle of the day.

First of the party leaders to arrive was Micheál Martin, or, as some of his acolytes like to call him these days, “Future Taoiseach”. He bustled into the Fianna Fáil tent, where green pencils and orange lollipops were among the delights laid out in their sweltering tent to tempt people inside.

There was also an edgy new FF sticker pointlessly asking “How Are You Today?” The sticker conjured up disturbing visions of Micheál putting on a Cork-meets-Manhattan voice and mimicking Joey from Friends.

Sweatin’ buckets, seeing as you asked.

The aspiring Taoiseach described the occasion as “spectacular” and buttered up Carlovians by declaring “the land is of particular high quality”.

He gave a very lengthy address followed by a question and answer session: “I’ll take any question on any issue that you may have.” There speaks a man in opposition.

In contrast to the Taoiseach last week, the Fianna Fáil leader completely dismissed any idea of a grand coalition with Fine Gael. “I would be anxious to go into government with other parties,” he said, pointedly adding: “Smaller parties.”

As the heat levels soared, colleagues clustered around him began to wilt. Agriculture spokesman Charlie McConalogue looked like he was going to faint and by the time Micheál moved onto Brexit and avoiding “the Armageddon of a no deal” crash-out, we feared Charlie might crash through the backdrop.

Meanwhile, the Taoiseach was on his way to Fenagh. He arrived at lunchtime and went straight to the championship field to view the ploughing finals. First to the tractor classes, where he strolled through stubble in dark jeans and casual open-neck shirt, sunglasses dangling from the cleft above the last fastened button.

The photographers were kept well back because last year they trampled on the freshly opened competition seams and there were complaints. So did Leo, but he’s allowed.

As he made his way to the horse drawn class, a security guard went one better than the hacks and asked him what was happening with Boris Johnson. The Taoiseach replied he had a morning telephone chat with the British prime minister and expected they would meet in New York next week.

“The rhetoric has tempered; the mood music is good,” he said later when asked about Brexit.

Back at the field, he met Ned and Ted again, two magnificent Shire horses. Prizewinning ploughman Coleman Cogan from Ballindoon in Sligo reintroduced the Taoiseach to the magnificent beasts. “They are known as gentle giants, very placid,” said Coleman’s wife, Patsy.

Last year, Leo made a decent attempt to plough a line. This time, he took the handles of the vintage plough and let Ned and Ted lead the way.

“I’d say he’s afraid of his life,” chortled a senior NPA official, while a judge in a high-vis vest with a blue Aldi cowboy hat slung behind his back declared “I think he’s a little too tall for those handles.”

But Leo ploughed on regardless, hands gripping the wooden handles, his face a study in concentration. The initial laughter from the experts in the crowd turned to grudging appreciation.

So how did he do? “He only did a small bit last time. We gave him a full scrape this time. He should have have left a little bit more weight on his right.”

Patsy Cogan was full of praise. “He did very well and he’s not afraid, I’ll say that for him. He was very confident.”

She was also impressed by the Taoiseach’s willingness to try his hand at ploughing for two years on the trot.

“We asked Michael Creed before [last year], but he wouldn’t do it. He didn’t come near us at all this year.”

Back among the stands, Micheál Martin spent all day until closing time working the crowd. He chatted to three women for a few minutes before moving on. One asked the other two who he was. They told her.

Another woman ran up to say hello and the photographers moved in. “Oh God, and me with an umbrella on my head!”

That may sound strange, but anything goes at the Ploughing and they were handing out umbrella hats at the Lidl marquee. They were the must have item this year, run a close second by Aldi’s cowboy hats. They were all gone by the time Micheál arrived, which must have come as a big disappointment to him.

Despite loitering for an inordinately long time opposite the Fine Gael tent (soon to be described by local TD Pat Deering as “the hot and steamy Fine Gael tent”) the Fianna Fáil leader didn’t manage to bump into his rival.

Leo scored a rare hit when he cracked a decent joke.

“What a privilege and pleasure it is to be here at my fourth ploughing,” he said, holding up five fingers. “Oh, sorry. I was thinking of Dublin.”

He didn’t work the walkways like his Fianna Fáil counterpart, but he had a good outing nonetheless. Both leaders will have been pleased with their day.

It’s just a pity the Fighting Cocks signpost failed to deliver. All back to Kildare Street, so.