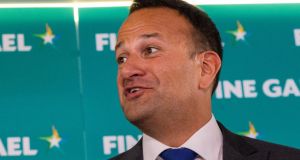 Some Ministers and TDs were privately critical of Taoiseach Leo Varadkar when he said he was open to a grand coalition with Micheál Martin’s party. Photograph: Douglas O’Connor

Taoiseach Leo Varadkar has sought to impose discipline on his Fine Gael Ministers over negative briefings against colleagues after he was privately criticised for comments last week about potentially sharing power with Fianna Fáil.

Some Ministers and TDs were privately critical of the comments made at the Fine Gael parliamentary party think-in by Mr Varadkar, when he said he was open to a grand coalition with Micheál Martin’s party.

The Taoiseach also said he would be open to facilitating a Fianna Fáil-led government from Opposition, but only if Mr Martin won more seats than him at a general election.

It was claimed by senior Fine Gael figures that such statements could help “rehabilitate” the Opposition party at a time when it was trying to portray Fianna Fáil as reckless.

Other party sources said the Taoiseach’s comments were a statement of fact, since Fine Gael had already offered a grand coalition to Fianna Fáil after the 2016 general election.

Mr Varadkar is understood to have chastised his Ministers at the weekly meeting of Fine Gael members of the Cabinet, which takes place ahead of the full Cabinet meeting.

Sources said Mr Varadkar said he had never, in his time as Taoiseach, negatively briefed against colleagues.

Fine Gael and Fianna Fáil continued their attacks on each other on Tuesday, with Minister for Finance Paschal Donohoe saying he would consider asking the Irish Fiscal Advisory Council to examine the spending policies of Opposition parties.

He told Martin Heydon, the chairman of the Fine Gael parliamentary party, he would consider making such a request. Fine Gael has repeatedly attacked Fianna Fáil over what it calls “reckless” spending promises amounting to €4.35 billion.

Fianna Fáil has described such claims as “childish” and Barry Cowen, its public expenditure spokesman, last night challenged Mr Donohoe over the funding of the National Broadband Plan.

Mr Cowen claimed Mr Donohoe had previously said €200 million would be needed from tax surpluses across a two to three-year period. The Offaly TD said a swing to a government deficit in a no-deal Brexit scenario means this will have to be funded from borrowing.

Mr McGrath said there would be social welfare increases in the budget but declined to outline any further detail. Mr Donohoe and Mr Varadkar have indicated any such increases will not be as significant as previous years.

“We are in a challenging situation now, I think everyone knows that, given that a no-deal Brexit is a distinct possibility and that could result in an up to €6 billion negative swing next year,” Mr McGrath said.

Meanwhile, the four pending Dáil byelections look set to be held in the last week in November, with TDs pencilling in Friday 29th as the most likely date.

Mr Martin told his team of senior TDs that various party leaders held a meeting on Monday night at which the timing of the byelections in Wexford, Dublin Fingal, Dublin Mid West and Cork North Central was discussed.

Although Mr Martin did not give his TDs an exact date, he said they would be held in the last week in November. Friday, November 29th, is seen as the most likely date since Irish elections and referendums are usually held on a Friday.

There was some loose speculation in Leinster House, on the first day the Dáil returned after the summer recess, that this could be the date of a potential general election if a Brexit deal was struck and Mr Varadkar decided to go to the country.

However, other TDs said this was a “gargantuan if”, given the current state of play in the Brexit talks, with significant gaps remaining between the EU and UK.