Miriam Lord: Is Adams in the hot tub and other burning questions from the SF think-in 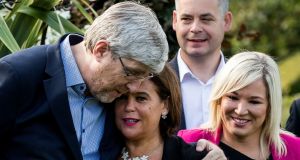 Sinn Féin’s John O’Dowd with leader Mary Lou McDonald and deputy leader Michelle O’Neill before a party away day at the Carrickdale Hotel and Spa in Dundalk. Photograph: PA

Understandably, the shocking news that Boris Johnson may have told lies to her majesty the queen when requesting her to shut down the mother of all parliaments cast an immediate and terrible pall over proceedings at Sinn Féin’s think-in on Wednesday.

The ashen faced Shinners, lost for words, struggled to cope when they learned of the British prime minister’s impertinence in the fragrant presence of Elizabeth ll (93), her charming husband (98) and their flatulent corgis, gawd bless ’em all.

It put a terrible damper on their special pre-Dáil away day in Dundalk. Still, spirits should rally when they all go to the Last Night of the Proms on Saturday.

Nonetheless, the riveting constitutional slapstick around Westminister has had an unwelcome knock-on effect for political parties here. Ordinarily, their pre-season windbaggery jaunts to country hotels generates easy publicity in the news starved days before the Dáil returns after summer. But this year, the bottomless political panto playing out across the water has stolen almost all their limelight.

Who wants to listen to nothing much about anything from our blessedly beige leaders when barmy Boris and Co are going bonkers over Brexit?

At least Sinn Féin confined their deliberations to just the one day.

In the interests of inclusivity, the party leader promised not to indulge in any displays of naked tribalism at their event.

Mary Lou McDonald swore she wouldn’t mention the Dublin team’s Drive for Five during official proceedings. So instead, she concentrated on a different all-Ireland dimension – the Ballyhoo for 32.

“Unity Ireland” was the message on the monitors in the ballroom of the Carrickdale Hotel. “Equality, Rights, Irish Unity” read the pop-up banners around the platform.

The party’s parliamentary representatives – TDs, MPs, MEPs, MLAs and Senators – worked their way through a timetable of workshops and discussions exploring variations on the same theme.

After an opening address by McDonald, there was a “Brexit and Irish Unity Panel discussion.” This was followed by a “Plenary Discussion on Brexit and Irish Unity”. Midday marked vice-president and Northern Assembly leader Michelle O’Neill’s delivery of a “brief internal update on negotiations in the North”. Fifteen minutes were allocated for this, which seemed rather a long time.

Matters veered wildly off course for half an hour after lunch with a panel discussion on “Organising for Change” before careering back on track for one last hurrah to consider the next steps in the campaigns North and South on Brexit and Irish unity.

The word the party really wanted to emphasise was 'solutions'

Mary Lou must have seen a different schedule. She told the media beforehand that their meeting was about preparing for the Dáil’s return, considering the forthcoming budget and examining “the solutions that Sinn Féin needs to bring forward in terms of housing and health and all of the challenges that face people in their day to day life”.

It transpired early on in the proceedings that, for all the references to unity in the literature and posters, the word the party really wanted to emphasise was “solutions”.

Sinn Féin has had a bad year. Two TDs jumping ship – Carol Nolan and Peadar Tóibín – very disappointing showings in the local and European elections and little comfort from the opinion polls.

“Solutions” is their solution to halting this slide.

Thing is, said Mary Lou, they have to drive home the message that Sinn Féin “is positive and front footed and solutions focused”. She accepted they haven’t been particularly good in communicating this to voters and that they must improve.

Public humility – a big step forward for Sinn Féin. The recent elections were a sobering experience. Many voters turned away. “And I want to say to all of you that we have heard what you said and that we are acting on it.”

The new tack was clearly signposted: it’s solutions all the way. The strategists have been listening to charges from opponents and commentators that the party spends far too much time criticising without offering solutions and constructive engagement.

Take the Northern Ireland backstop, that’s one of their solutions.

Of course when they initially “forwarded that solution” people said it was a non-runner. “And now, here we are, the backstop has been forwarded, the solution is on the table.”

The party is all set to go for the new Dáil term and we’ll be sick of the sound of solutions by Christmas.

To accompanying birdsong, she stood on the manicured lawn surrounded by her All-Ireland colleagues, near the crazy golf and down from the outdoor hot tub.

“There’s a man in the hot tub,” said a late arriving colleague, looking most put out. We scanned the rows of politicians. No sign of Gerry Adams. Oh, dear God, say it ain’t so. Then someone else arrived and said there was no need for people to panic because he saw just Gerry sitting inside at a table in the ballroom and he was wearing jeans.

The last major event of the wretched think-in season gets under way on Thursday near Ballycotton in Cork when Fine Gael drags the suffering hacks to the other end of the country for two more days of inconsequence.

The party has booked every room in the Garryvoe Hotel to further inconvenience the attendant media and avoid being pestered over breakfast. Fianna Fáil started doing the same thing when they were losing the run of themselves in government.