‘Use it or lose it’ law being drafted for planning permissions

Construction has started on less than 30% of fast-track developments, committee hears 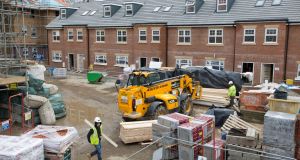 Up to the end of September ‘47 of the 163 SHD permissions granted to that date, roughly 29% had been activated at that time’, an Oireachtas committee has been told. File photograph: Neil Hall/Reuters

Legislation for a “use it or lose it” provision, which would stop developers from hoarding planning permissions, is being drafted by the Department of Housing, officials have told an Oireachtas committee.

Construction has started on less than 30 per cent of fast-track planning permissions granted under the Strategic Housing Development (SHD) process, Terry Sheridan, principal officer of the department’s planning policy and legislation section, told the housing committee.

Under the SHD process applications for large-scale housing and student accommodation developments are made directly to An Bord Pleanála, and not to local authorities. The system was introduced in 2017 to speed up the process of delivering housing.

However, Mr Sheridan said up to the end of September “47 of the 163 SHD permissions granted to that date, roughly 29 per cent had been activated at that time”.

The programme for government committed to scrapping the SHD process at the end of next year, although this has now been extended to February 2022 due to planning delays caused by the Covid-19 pandemic.

Although the system was being brought to an end, Mr Sheridan said the department was drafting legislation for the “use it or lose” it provision, recommended by an SHD review group last year, which would see planning permissions lapse if they were not used in a timely manner.

The provision would apply not only to SHD permissions but “more generally on housing developments going forward”, he said.

The primary purpose of the SHD arrangements was to significantly speed up the planning decision-making process for large housing developments. Mr Sheridan said the department wanted to “ensure the positive elements” of the SHD process, “in terms of timelines and greater certainty for developers can be retained in an appropriate manner”.

The department wanted to “bring forward the best elements” of the process, including pre-application consultations with developers.

Rachel Kenny, director of planning operations with An Bord Pleanála said about 50 per cent of the SHD developments granted permission in 2018 and 2019 had been “activated”. Some schemes were before the courts due to judicial review proceedings, and recently permitted developments may not have started work yet “so the 70 per cent isn’t entirely reflective or fair” she said.

Assessing appeals against and objections to housing developments made up the bulk of the board’s work, whether they were SHD schemes or smaller developments, she said.

“For just some reason as a society we have a concern and a worry and an opposition to housing no matter who decides it.”