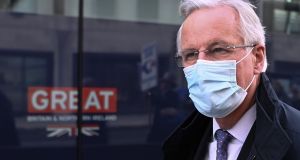 EU chief negotiator Michel Barnier in London on Friday for negotiations on the future relationship between the EU and the UK. Photograph: Daniel Leal-Olivas/AFP via Getty Images

With just seven weeks to go until an abrupt change to trade terms with Britain, there is mounting concern at continued uncertainty over the final details of what procedures will govern the movement of vital supplies in and out of Ireland on January 1st.

Talks between Britain and the European Union broke off after a week of intense negotiations in London that were overshadowed by turmoil in Downing Street, in which senior aides to British prime minister Boris Johnson resigned and there was speculation about the position of chief negotiator David Frost.

At one point chief EU negotiator Michel Barnier took a break from negotiations and posted an image of himself “looking for level playing fields” in a London park.

Hundreds of billions of euro in trade ride on whether the EU can strike a deal with its former member. Without one, the legal underpinnings of relations built up over decades would dissolve overnight and tariffs would automatically come into force, an economically damaging outcome that the EU side is concerned is becoming harder to avoid.

In briefings to businesses on the complex customs declarations requirements that will be required irrespective of whether a deal is reached or not, the British government has been unable to explain the special arrangements that will be in place for goods moving into Northern Ireland from January, saying that it would “become clearer in the next week or so”. A significant amount of work remains to be done on the issue, The Irish Times understands.

Britain has asked the EU to allow a grace period for export declarations for goods moving from Britain to Northern Ireland to avoid potential disruption to food supplies, a proposal backed by rival parties in the North as well as industry figures increasingly desperate for certainty.

It comes after supermarkets have warned the range of products they stock could be greatly reduced because of the need for rigorous checks on agri-food products from Britain, and the North’s Department of Agriculture admitted infrastructure needed for checks will not be ready on time.

Yet even if a grace period for declarations is granted, Britain still accepts that consignments would nevertheless be subject to the checks and controls required, The Irish Times understands.

Seamus Leheny from the Freight Transport Association in Northern Ireland said a grace period would be “not just welcome, it’s required, it’s needed because, especially for food, we just aren’t ready.”

Sinn Féin leader Mary Lou McDonald said that the proposal was a “workable solution”, after the North’s cross-party leadership wrote to the European Commission emphasising supermarkets’ concerns that there was a “real threat to the continuity of the supply” of food and other products.

Responding to the letter, a European Commission spokesman said it was taking the warnings “very seriously”, and discussions were continuing with the UK.