Flanagan says ‘nobody happy’ with system but housing key as 7,700 people in centres 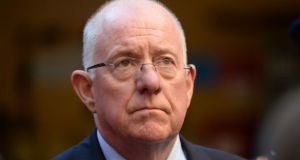 There will be a “root-and-branch transformation” of the direct provision system of housing for asylum seekers which will ultimately lead to its ending, Minister for Justice Charlie Flanagan has said.

Nobody is happy with the system, he acknowledged.

“I’m not happy,” he told RTÉ’s This Week programme, with the direct provision system of housing for asylum seekers, and neither was was Minister of State for Equality David Stanton. Taoiseach Leo Varadkar had “indicated that he’s not happy. In fact nobody’s happy”, Mr Flanagan said.

He said they were making progress on the “root-and-branch transformation of the system”, which “ultimately I believe will lead to the abolition of the system.” However, he could not say when, “because this is a complex issue”.

Black Lives Matter protests took place in Ireland following the killing in Minneapolis of George Floyd and demonstrations across the US. Irish protesters also called for the ending of direct provision here.

But the Minister said there were 7,700 people in direct provision, and “if people are calling for the system of direct provision to be immediately abolished and changed the question of housing is fundamental.

“We don’t have that number of houses or apartments freely available at this point in time but we can work towards that.”

He said his department had been talking to housing associations looking at alternative housing models, how they would be funded, and how measures such as the housing assistance payment (Hap) scheme could play an alternative role for those in direct provision.

“We have made progress in that area, but obviously I accept that there is more to be done.”

He pointed to the interim recommendations of former secretary general of the EU Commission Catherine Day, who chairs a group commissioned by the Minister, to look at the system in the longer term.

The group will deliver a final report at the end of September but has recommended measures including extending the right to work to asylum seekers, the urgent need to explore alternative housing models and reducing the time applications for asylum take to be decided.

He said “direct provision is temporary while these applications and it’s taking too long, I acknowledge that”. Improvements had been made in 2015 but there were still too many people in direct provision for too long a time.

Last year an inter-departmental group including housing, social protection, business and employment was established because it is not an issue to be solely dealt with by the Department of Justice.

They were offering the basic essentials for people in terms of shelter, food, healthcare and education while they are awaiting a decision on their application.

He said if a programme for government was agreed in the coalition formation talks it would include the issue of direct provision and “while we’re waiting for the system to be brought to a conclusion we’re actively looking for sensible working alternatives.

“And anybody who has an input in that regard, I would suggest they make these alternatives available, because this is complex.”

Ms Hoey acknowledged that a new “more humane and dignity-centred system” would take time to implement but it “needs the political will for change”.

She said five things could be done immediately that would make a substantial start to the reforms. These were extending the Susi system of education grants to those living in direct provision; regularisation of undocumented migrants; passing the Traveller Culture and History in Education Bill; implementing legislation to give citizenship to children born here and extending the right to work to asylum seekers and allowing them access to a driver’s licence.

“We also need to challenge misinformed views and myths about refugees in Ireland, and now is the time when political action can have a real impact,” Ms Hoey added.