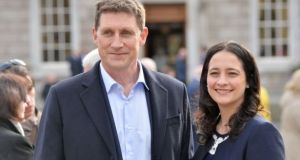 Green Party deputy leader Catherine Martin has confirmed to some party members that she will stand against Eamon Ryan in a leadership contest.

Ms Martin has replied by email only to those members who contacted her directly in recent weeks urging her to run, sources said.

In the email, she said: “After careful consideration, I have decided to accept your nomination and allow my name go forward as a candidate to contest the party’s leadership election.

“I am both grateful and humbled by the many nominations I have received and I want to particularly thank you and all of the other members and party groups who have nominated me or contacted me urging me to run.

“Our party has always cherished its inherent democratic structures and whilst it goes without saying that the timing of this election is less than ideal, the circumstances are beyond our control.

“Hence in light of these government negotiations (which are entering a critically important phase), I will do no canvassing and campaigning whatsoever, nor will I do any media in respect of the leadership contest until such time as the crucial programme for government negotiations have concluded uninterrupted and our members have considered and voted on ny deal which may arise.”

Nominations close tomorrow, and Green Party rules say that the leadership position must be opened within six months of a general election. The 2020 General Election was held on February 8th.

However, she has asked that there be no campaigning until government talks have concluded and the Green Party members vote on a potential programme for government.

A period of hustings and debates is expected to follow, with postal ballots sent to members on July 1st.

Ms Martin did not return calls on Saturday evening.

Reacting to the development, a senior Fine Gael source said: “Like how can this even work? We go into government and their first priority is not the country but their party.”

One Green source expressed frustration with Fine Gael in the coalition talks in particular, and wondered if the Green Party was being pushed to a point where agreement on a programme for government may not be possible.

Government formation talks continue on Sunday. Talks on Saturday were scheduled to address key parts of the next programme for government, but some central issues remain unresolved, sources said.

The evening sessions were due to focus on the issues of retrofitting and “just transition” - the Greens want to help Bord na Móna workers in the Midlands find alternative green careers - as well as communications.

Key issues such as energy and climate were also on the agenda, but the more contentious parts of these policy areas - such as the Greens’ demand for a seven per cent annual average reduction in greenhouse gas emissions - will not be discussed, sources said.

Meanwhile, talks about social protection, may not at this stage address the divisive issue of the state pension age.

The talks took place amid growing frustration among some in the Greens over a lack of progress in the talks process, which has thrown into question whether an agreement will be reached by Tuesday’s deadline.

Three plenary sessions were cancelled on successive days this week, preventing the full negotiation teams from meeting and stopping parties from signing off on agreed sections of the planned programme for government.

Earlier on Saturday, teams from Fine Gael, Fianna Fáil and the Green Party focused on transport and mental health.

Transport policy is among the most contentious topics to be discussed due to Green Party demands for reduced spending on the development of roads projects in favour of investment in public transport and improvements in cycling infrastructure.

Issues being discussed by the deputy leaders are said to include housing. The €116 billion National Development Plan (NDP) is thought to be a significant sticking point.

Social welfare issues, including the controversial issue of the age of eligibility for the State pension, may not be addressed today, depending on the time available, according to one person involved in the talks.

Meanwhile, Fianna Fáil TD Robert Troy said he would “like to think” that Government formation talks are “coming to near a completion”.

He added that the party had voted to amend rules on Friday, which would enable them to partake in postal voting on the issue.

The Green Party’s Hazel Chu said the parties are at a point “where there hopefully will be a deal on the table”.

“We’re very close to closing our planning on that and we want to make sure we communicate with our members first,” she said.

Minister for Social Protection Regina Doherty said the “overriding view” in Fine Gael was to form a government that could last for four or five years.

She said the party wants a government which can “rebuild Irish people’s confidence, rebuild the economy, rebuild society and to fix some of the glaring issues that were pointed out to us in February”.

Asked about a deadline for government formation she said: “We need a Seanad by the 30th of June. That’s a given. There’s your deadline.”