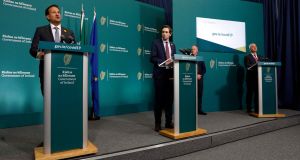 Across two Cabinet meetings on Thursday and Friday, Ministers discussed and then gave the green light to an unexpectedly dramatic acceleration of the lifting of the coronavirus restrictions.

Some around Government had wondered why the Taoiseach had convened a meeting in Dublin Castle on Thursday night, the first time the full Cabinet had met face-to-face since the restrictions were introduced in March.

At the meeting, Leo Varadkar and Minister for Health Simon Harris asked the Ministers for their views on what should be accelerated, and a discussion followed.

Those present say that having everyone in a room face to face allowed for a more free-flowing debate than has been the norm during recent meetings held via video link.

Minister for Rural Affairs Michael Ring, one of the most vociferous in arguing that the lifting of the lockdown could be accelerated, argued that the limit on travel should be abolished completely rather than expanded from 5km to 20km from Monday.

The Cabinet decided that people should be allowed to travel either 20km from their homes or anywhere else within their county. It was one of two occasions where the Ministers deviated from the advice of the National Public Health Emergency Team (NPHET); the other being the decision to allow shopping centres to reopen from June 15th.

Minister for Business Heather Humphreys, whose public profile and stock across Government has risen during the crisis, argued that retailers in shopping centres should not be at a disadvantage to those on the high street, whose reopening had been agreed by NPHET.

Recent weeks had seen arguments within Government, and outside, about how much Ministers should adhere to the advice of NPHET and chief medical officer Dr Tony Holohan.

The discussion and decisions across the two Cabinet meetings this week gave Ministers buy-in, and a sense of ownership, to what was ultimately announced.

But if there was pressure applied to NPHET and Dr Holohan to accelerate the lifting of the lockdown, it is likely to have happened behind the scenes.

Varadkar and Harris insist that the politicians have worked alongside their medical advisers throughout this process and, at the post-Cabinet press conference on Friday, the Taoiseach acknowledged that there was a back and forth between Government and NPHET on the way forward.

He pointedly told the Dáil on Thursday that he had asked Dr Holohan and NPHET to examine if some elements of the lockdown exit plan could be accelerated – measures moved from phase three to two and phase four to three, for example.

Dr Holohan had told NPHET he had been thinking about how to merge the final phases together, and Government sources pointed out that the decision to cut the original plan down from five stages to four came from NPHET itself.

Sources said NPHET discussions this week included claims that a decision not to bring forward more phases could be regretted if a further lockdown had to be imposed in the event of a second Covid-19 wave.

After the acceleration was announced, those who argued that the Cabinet should take more control away from NPHET were satisfied. Those who said NPHET and Government Buildings moved in line with each other pointed to a correlation between Dr Holohan’s letter to Harris recommending to proceed to the next phase on Monday and the final Cabinet announcement.

Those who had argued that the plan should be speeded up to lift the economy, boost domestic tourism and reduce the number of people out of work believed it was their stance that had won out.