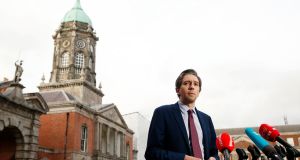 Minister for Health Simon Harris has said “all the indicators look good” in relation to moving to the next phase of easing Covid-19 lockdown restrictions.

Speaking after a Cabinet meeting on Thursday, he said there were “encouraging signs” in relation to hospitalisations.

The Minister said the Government was keen to know from the National Public Health Emergency Team (NPHET) how the roadmap could change if there was good progress with the virus.

“I expect tomorrow [Friday] I will hopefully be in a position to proceed with phase two.”

He said he was also hoping to consider measures for children and older people.

When asked if hotels could potentially open sooner to give them time to use some of the holiday season before schools reopened, Mr Harris said “a body of work” would need to be done about any such acceleration in the reopening businesses.

Mr Harris also said the Cabinet agreed a refreshed version of the Vision for Change document on the provision of mental health services.

Mr Harris cautioned that moving from one phase to the next phase was “not inevitable and not guaranteed” and an announcement would be made following a Cabinet meeting on Friday. He said there were no current plans to change the guidelines for two metres physical distance to one.

The Cabinet met in Dublin Castle on Thursday evening, the first time that all Ministers were physically present together in a number of weeks. Most Cabinet meetings have involved Ministers spread across different rooms or dialling in.

Another meeting will be held on Friday morning to sign off the next relaxation of lockdown measures, moving the country into the second phase of the reopening Ireland plan.

Ministers are due to approve the next round of relaxation measures which will see the travel limit increase from 5km to 20km.

Taoiseach Leo Varadkar confirmed on Thursday that the Government had made proposals to the State’s public health team to bring aspects of the reopening Ireland plan forward. He said that elements of phase four could be brought forward to the previous phase, and elements of phase three could be forward to phase two which begins on Monday.

NPHET met earlier on Thursday and agreed to recommend that some larger retailers be allowed open next Monday under strict conditions, as well as approving further measures to help children with special needs and a return to some educational, amenity and summer camp activities.