Fianna Fáil leader Micheál Martin said that it would be the battles in individual constituencies that would determine the identity of the next government as much as national polls. 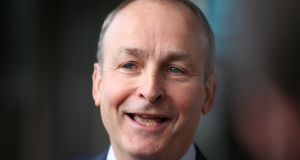 Fianna Fáil leader Micheál Martin has said the electoral battle between Fine Gael and his party will “closely fought” until polling on February 8th and the outcome of the election will be decided in the last few days of the campaign.

Mr Martin said on Sunday that it could be the battles in individual constituencies that could determine the identity of the next government as much as national polls.

He also disclosed his party would be unveiling a policy to bring back a Special Savings Incentive Allowance (SSIA) type scheme to help young people save up for deposits on housing. He said his government would provide €1 for each €3 saved up to €10,000. A similar SSIA scheme for the general population was operated between 2003 and 2007.

Mr Martin also contended that a series of attacks by Fine Gael on Fianna Fáil on social media in the past few days were counterproductive as Irish people did not respond well to negative campaigning.

Mr Martin also vowed that Fianna Fáil would bring in legislation to “smash” criminal and drug gangs in in power. He also promised that a government led by him would implement speedy delivery on key projects such as broadband, affordable housing and health infrastructure.

The Fianna Fáil leader was speaking to reporters in RTE after an interview on the This Week programme in which he also acknowledged that Fianna Fáil had made mistakes when last in government.

He also responded to a weekend opinion poll that showed Fianna Fáil 12 points ahead of its nearest rival Fine Gael.

“I think national polls have to be treated with a severe degree of caution. I believe it’s much tighter. I actually belive that the battles in the individual constituencies will determine the outcome of this eleciont. And it will be a closely fought electoin,” he said.

“All our experience tells us from previous campaigns that it is in the last week that people make up their minds. There will be a lot of debate in the coming weeks and polls will fluctuate.

“And I have never been a beliver in national polls as the predictor of the outcome of a general election. I also anticipate there will be a fluctuation in polls over the coming weeks and different polling companies with different methodologies will produce different results,” he said.

Asked about negative campaigning and attacks on Fianna Fáíl by Fine Gael on social media, he said: “Some people acknowledge that we played a constructive role in the four to five years.

Earlier on this week, Mr Martin was asked about Fianna Fáil’s record when last in government.

Lessons were learned form that expirence and not just by us but by policymakers in general. Over the past nine years we have demonstrated that. I don’t think you could find in the history of Irish opposition politics, an opposition that has been more responsible.”

He denied that Fianna Fáil had promised up to €3 billion in spending promised and claimed Fine Gael had announced €600 million in extra spending in the weeks before the election to “soften Uí” the electorate. He insisted his part would stay within EU fiscal rules. He also said the ratio favouring public spending over tax cuts would be at least three to one.

On housing and health he claimed Fianna Fáil would be hands on and deliver projects quickly.

“Fine Gael has crated this kind of rental society and a rip-off rental culture.

“We want to crease a society where home ownership is a realistic prospect again, he said.

“We are not taking lectures from a party that has a hands-off approach to government.”

The Sunday Times Behaviour and Attitudes poll places Mr Martin’s party at 32 per cent while Leo Varadkar’s party has fallen seven points and sits at 20 per cent, just one percentage point ahead of Sinn Féin at 19 per cent (down one). Its previous poll in December put Fine Gael and Fianna Fáil on an equal footing at 27 per cent each.

Most of the survey preceded the announcement of a February 8th general election by Leo Varadkar on January 14th and over 900 voters were interviewed between January 2nd and 14th, according to the newspaper. The Greens sit at 7 per cent (up 1) with Labour at 4 per cent (down 2).

Tánaiste Simon Coveney appeared to see a silver lining in the poll which would “act as a motivator for Fine Gael people and Fine Gael candidates right across the country”. Mr Coveney was speaking on his way into Thomond Park, Limerick, to watch Munster .

“I think its going to motivate people to work harder to sell out message; to listen to people, and to listen to voters, because clearly opinions are volatile, and we need to work hard, but there are three weeks left in this campaign.”

Fine Gael has “a very strong and positive message to sell” he said.

“The country today is in an infinitely better place than it was eight or nine years ago. People are back to work, the economy is strong.”

However he acknowledged Fine Gael has “work to do in terms of public services, particularly around housing and healthcare”.

The Cork TD also acknowledged the controversy surrounding Fine Gael’s handling of a proposed commemoration of the Royal Irish Constabulary “probably” contributed to his party’s poor performance in the poll.

Speaking in Dublin on Sunday, Labour Party leader, Brendan Howlin, said he is still confident his party’s representation in the next Dáil will be “in the double digits”, despite a poll on Sunday showing support of just 4 per cent.

“I am very confident that we will be in double digits,” he told reporters in Dublin. The general election would produce a surprise performance for the party in a number of constituencies, he predicted. “The battles are on the ground, in each individual constituency.”

Asked about the results in the poll for Fianna Fail and Fine Gael, he said he believed the latter party’s poor showing was the result of the “debacle that Fine Gael made of the black and tan issue”, a controversy that was at its height when the poll was taken.

At the same press briefing Labour TD Alan Kelly, referring to his party’s contest with the Green Party for votes, urged people to look at parties policies on all major issues, health, education, public services, and climate change, and make “a holistic decision”, rather than voting for a party that “emphasises just one issue”.