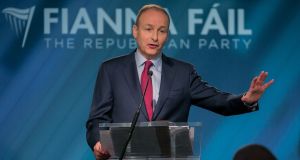 This is the constituency of Fianna Fáil leader Micheál Martin. Photograph: Gareth Chaney/Collins

Cork South-Central has long been a bellwether constituency and, notwithstanding the fact it is loaded with big-beast candidates in Micheál Martin, Simon Coveney and Michael McGrath, it may well prove so again.

Over the years, this constituency has reflected national trends, returning at various elections Progressive Democrats, Labour and Sinn Féin TDs, with its electorate capturing the national mood on each occasion with their choices.

The constituency is broadly middle class with working-class enclaves in Togher, Ballyphehane and Mahon, while it also includes the commuter town of Carrigaline as well as Cork Lower Harbour, home to many pharmaceuticals.

Aside from national issues such as health and housing, perhaps the greatest concern locally is transport, with the proposed upgrade of the N28 to motorway provoking protest from residents in Douglas and Rochestown.

Generally, the congestion of the N40 South Ring Road is a daily occurrence and demands for improved public transport, including possibly a light rail system linking Blackrock to Ballincollig is likely to feature on the doorsteps.

For many harbour residents, the other major local issue is the proposed incinerator at Ringaskiddy, which local groups have been opposing for nearly two decades and is currently the subject of a High Court challenge.

Most observers agree that Cork South-Central is one of the most predictable constituencies, with Fianna Fáil leader Micheál Martin, Tánaiste Simon Coveney and Fianna Fáil spokesman on finance Michael McGrath all safe.

The only issue to be decided, aside from who tops the poll, is who will take the last seat won in 2016 by Sinn Féin’s Donnchadh Ó Laoghaire, when he squeezed out sitting Fine Gael TD Jerry Buttimer, outpolling him by 12.55 per cent to 11.53 per cent.

Both Ó Laoghaire and Buttimer will be renewing their rivalry on the doorsteps this time out but joining them in the mix will be newly elected Green Party councillor Lorna Bogue, who ran in 2016 when she took just 2,064 (3.71 per cent) first preferences.

But Bogue will be hugely buoyed up this time around by her own personal performance in last year’s local elections, when she won 2,207 first preferences, or 13.99 per cent of the vote, in the South East Ward.

Also providing her with a major boost was the performance of the Greens generally, with the party upping its vote across Cork city by more than 7 per cent and capturing four council seats – three of them in southside wards.

Interestingly, across the three southside city council wards and the Carrigaline ward of Cork County Council, which make up the vast majority of Cork South-Central, the Greens outpolled Sinn Féin by more than 1,500 votes.

The upswing in Green fortunes contrasts with a drop in Sinn Féin support of almost 12 per cent in the local elections, which cost it four council seats but all the opinion polls carried out since the general election was declared have shown growing support for Sinn Féin.

On the face of it, if Ó Laoghaire captures the 25 per cent showing obtained by Sinn Féin in this week’s Irish Times/Ipsos MRBI poll, then he should make it but Sinn Féin have never managed to achieve their opinion poll ratings on election day in Cork South-Central.

Ó Laoghaire may well be ahead of Bogue on the first count but what will be crucial here will be transfers and in particular the votes of Buttimer, who may find himself facing an earlier than expected exit if Fine Gael fortunes are on the wane as the polls predict.

If Bogue picks up transfers from Patricia O’Dwyer of the Social Democrats and Ciara Kennedy of Labour and stays in the race longer than Buttimer then she is more likely than Ó Laoghaire to pick up Buttimer transfers and she may just shade the last seat.