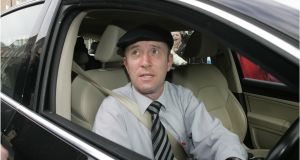 Michael Healy-Rae: ‘I did nothing wrong.’ Photograph: Dara Mac Dónaill

The controversy surrounding the Dáil fobbing system and Kerry TD Michael Healy-Rae is to be raised in the Dáil on Tuesday when TDs return from the Halloween recess.

Just a fortnight after the Dáil was convulsed by the controversy over voting in the chamber, which led to apologies from Fianna Fáil TDs, Rise TD Paul Murphy has said he will raise the fobbing issue, and has already written to Ceann Comhairle Seán Ó Fearghaíl to seek an investigation into possible abuses of the system.

TDs are required to “fob in” – register their attendance at electronic points throughout the Dáil complex – for 120 days a year in order to claim expenses. Last week it was reported that Mr Healy-Rae had attended a funeral in Kerry on a day he was fobbed in at the Dáil.

“Unless Michael Healy-Rae has mastered the art of bilocation, he has some serious questions to answer about how he fobbed in the Dáil and attended a funeral in Kerry hours later. I suspect he’s not the only one, and I have written to the Ceann Comhairle seeking an investigation into potential abuse of the fob system,” Mr Murphy said.

But Mr Healy-Rae has strongly denied any wrongdoing. He has said he fobbed in at his Dáil office early in the morning and left for Kerry shortly afterwards – a practice not prohibited by the Dáil rules.

Mr Healy-Rae told Radio Kerry on Monday he was in the Dáil on June 21st, 2018, and then left Dublin to travel to south Kerry for the burial of an uncle of his son-in-law.

Controversy has arisen about the TD’s absence from the Dáil on that date, the day of the visit of EU leader Jean-Claude Juncker as Dáil records show he clocked in to the Dáil that morning. He was criticised by his constituency colleague, Fianna Fáil TD John Brassil, for missing the Juncker speech – he is chairman of the European Affairs Committee – but Mr Healy-Rae said he had no apology to make.

The TD explained that he was regularly in his Dáil office in the Department of Agriculture building before 7am, and that on the day in question he left after a while to attend the service.

The Oireachtas confirmed that the Department of Agriculture building is open 24-7, while Leinster House usually opens at 7.30am.

“I wasn’t at the funeral. It was the burial I made. I didn’t make the Mass. I was late for the Mass,” Mr Healy-Rae said. “I did nothing wrong.”

He added that he had phone and toll records showing he had travelled from Dublin to Kerry on the Thursday morning. He estimated (based on the time he arrived in Sneem for the burial) that he had left Dublin around 8am.

TDs are paid expenses to cover the cost of travel to and from Leinster House, overnight expenses and other constituency travel expenses. To claim full rates, they must register their attendance at Leinster House using the electronic fob system. The system does not, however, record the time at which TDs fob in.