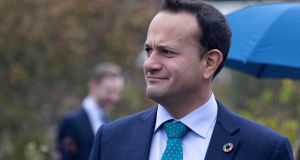 The Taoiseach is being urged to contest elections in Northern Ireland by Young Fine Gael, the party’s youth wing with which Leo Varadkar was active as a student. Photograph: Colin Keegan/Collins Dublin

The youth wing of Fine Gael has written to Taoiseach Leo Varadkar calling for the party to stand candidates in the upcoming general election in Northern Ireland, and to take seats in Westminster if elected.

Killian Foley-Walsh, president of Young Fine Gael (YFG), wrote to Mr Varadkar in recent days stating the youth wing was “strongly of the view that the party should contest the upcoming election”.

The British general election is due to take place next month on December 12th.

Mr Foley-Walsh’s letter asked if Fine Gael had any plans to stand candidates in the upcoming election, and “whether our candidates will be committed to taking their seats in Westminster if elected?”

He told Mr Varadkar - himself a former student activist with YFG - “we hope that the answer to both questions will be positive”.

Last year, Tánaiste Simon Coveney said he would like to see Fine Gael involvement in Northern Ireland politics in the future, although he stressed the issue wasn’t an immediate priority for the party.

Speaking at an event marking the 20th anniversary of the Belfast Agreement, Mr Coveney said “I think there is a huge interest in Fine Gael in what happens in Northern Ireland” but “I think we have a unique role at the moment in Government in Ireland” in the context of dealing with Brexit and the Stormont impasse.

Previously Fianna Fáil indicated it would stand candidates in future Northern Ireland elections, before later entering a “partnership” arrangement with the SDLP following talks of a potential merger.

In October 2018 Éamon Ó Cuív TD and Senator Mark Daly attended a campaign launch for councillor Sorcha McAnespy who was unveiled as a Fianna Fáil candidate for the 2019 NI local elections.

The rogue move caused significant embarrassment for the party who were forced to clarify no decision had been made about contesting the election.

Both Mr Ó Cuív and Mr Daly were disciplined by the party over the unofficial campaign launch.

Ms McAnespy went on to contest the local elections in May as an Independent candidate, but lost her seat on Fermanagh and Omagh District Council.