Complaints about Niall Collins, Timmy Dooley and Barry Cowen to be considered 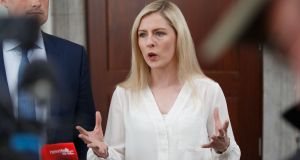 However, the committee will meet on Wednesday to consider Mr Rock’s complaints about Ms Chambers’ colleagues Niall Collins, Timmy Dooley and Barry Cowen.

Mr Dooley and Mr Collins last week apologised to the Dáil for their roles in the controversy about Dáil voting which had been dominating domestic politics.

Mr Rock also has lodged a complaint about Mr Cowen, but has asked the committee to consider Mr Cowen’s votes on a different date to that already considered by the Clerk of the Dáil in his report last week.

Mr Collins admitted to voting on Mr Dooley’s behalf on six occasions while Mr Dooley was not in the chamber. The two men have been sacked from Fianna Fáil’s front bench by party leader Micheál Martin.

Fine Gael sources continue to question aspects of the statements given by the two Fianna Fáil TDs last week, and the party is keen to keep up the pressure on its rivals after a week which saw Fianna Fáil on the back foot in Dáil exchanges on the controversy.

However, with the Dáil in recess this week for the mid-term break, the political temperature is expected to drop somewhat.

Despite the recess, the Dáil Committee on Members’ Interests, which is chaired by the Fine Gael TD Hildegarde Naughten and contains one representative each from Fianna Fáil, Labour, Sinn Féin and the Independents, is scheduled to meet on Wednesday to consider the complaints against the Fianna Fáil TDs.

The committee must first decide if the complaints are frivolous or vexatious. If it decides they are not, then it can proceed to launch an investigation into the claims, though some political sources said they thought yesterday a full scale investigation was unlikely, given the Dáil has already heard statements on the matter.

The Irish Times understands the committee has not received any formal complaints about voting by Fine Gael Ministers. Reports last week suggested Fianna Fáil was submitting complaints that Fine Gael Ministers may not have been in the chamber while votes were cast in their names. However, it is believed that, despite reports, these complaints were made to the Ceann Comhairle’s office, not the Members’ Interests Committee.

Fine Gael Ministers denied any of them were absent from the Dáil, though admitted to engaging in the practice – common across the Dáil – of voting for members who were not in the seats but were in the Dáil chamber.

Meanwhile, Mr Dooley was re-elected as a vice-president of Alde, the European group of liberal parties, at the group’s annual conference in Athens on Saturday. He was strongly backed for the role by Mr Martin.