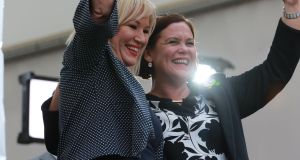 A woman should be the next taoiseach and Mary Lou McDonald is the person for the job, Sinn Féin’s deputy leader Michelle O’Neill (left) has said. File photograph: Nick Bradshaw.

A woman should be the next taoiseach and Mary Lou McDonald is the person for the job, Sinn Féin’s deputy leader Michelle O’Neill has said.

Speaking at the opening of the party’s two-day ardfhéis at Belfast’s Waterfront Hall on Friday, Ms O’Neill said Sinn Féin “stands with women” and is campaigning to close the gender pay gap, to bring in laws to provide access to health care across the island and to have more women in public life and politics.

“And surely you agree it is time for a woman taoiseach to lead the next Government,” she said. “And surely you know that woman is Mary Lou McDonald TD.”

Ms O’Neill, Sinn Féin’s Northern leader, said the party was ready to “be in Government North and South; to assert and deliver rights for all; to continue the fight against Brexit and to oppose austerity at every turn”.

On Brexit, Ms O’Neill said Sinn Féin wanted “the whole of Ireland to remain within the EU just like the people voted”.

She said her belief was that having no powersharing institutions in the North was “the price” of the DUP’s confidence and supply arrangement with British prime minister Theresa May’s Conservative government at Westminster.

Ms O’Neill and Ms McDonald would be meeting Ms May on Wednesday to again call for the British-Irish Intergovernmental Conference to be convened without delay.

Following her and Ms McDonald’s meeting with Prince Charles in Cork on Thursday, Ms O’Neill also reflected on the themes of identity and reconciliation. She said unionists and nationalists needed to have “the humility to accept that we have conflicting narratives, conflicting histories and conflicting allegiances”.

“We must reach a sustainable compromise through dialogue and agreement,” she said.

“Create a future where everyone feels they belong. Where our culture and identity is respected. Where we recognise each other’s right to express being Irish, British both, or neither.”

Donegal TD Pearse Doherty told delegates now was the time to build a new economy for a changing Ireland.

He said Sinn Féin offered “economic transformation” and a vision for a society “underpinned by stable and shared prosperity”.

“We offer a programme to create a modern economy across our island, for the first time guaranteeing world-class services as your birthright, from cradle to grave,” he said.

He said Fine Gael claim to offer stability but suggested the party had “cast a cloud of fear and insecurity in homes all across the state”. He said Sinn Féin listens to people when they say they are struggling with finances and that “if I am minister for dinance I will have your back. Sinn Féin will have your back”.

He told delegates “whenever Leo (Varadkar) and Micheál (Martin) decide the love-in is over, and an election is called, they will know – Sinn Féin is ready. The people of Ireland are ready.”

“A new Ireland is coming. It needs new leadership and big ideas, to have your back and to deliver real economic and social transformation. Sinn Féin is that leadership – for all of us,” he said.