Varadkar attacks left for making ‘pariahs’ of the religious 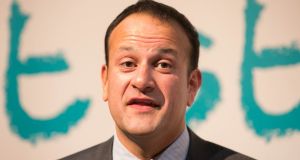 Taoiseach Leo Varadkar has hit out at socialist parties and groups in the Dáil.

Taoiseach Leo Varadkar has hit out at socialist parties and groups in the Dáil, accusing them of wanting to “turn religious people into pariahs”.

He made the claim as he confirmed that all publicly funded hospitals will be required to provide abortion services once legislation is enacted in the Oireachtas.

Solidarity TD Mick Barry asked would abortion services be provided by the new national maternity hospital to be built in the grounds of St Vincent’s Hospital in Dublin, “a campus controlled by a company with a board dedicated to a Catholic ethos”.

He said the vote to repeal the Eighth Amendment posed questions on Church and State “more sharply”, adding that the “impetus for change has not come from the political establishment. Rather it has come from below as a result of popular pressure.”

Mr Varadkar said the Government would use the same model is used for the Protection of Life During Pregnancy Act, which provides for abortion where a woman’s life is at risk.

“Hospitals such as Holles Street, which has a Catholic voluntary ethos, the Mater, St Vincent’s an others will be required and expected to carry out any procedure that is legal in the State.”

The Taoiseach added: “Conscientious objection provisions will apply to individual doctors, nurses and midwives who do not want to participate in providing abortion services.

“But it will not be possible for publicly-funded hospitals no matter who their patron or owner is, to opt out of providing these necessary services, which will be legal in the State once the legislation is passed by the Dáil and Seanad.”

However Mr Varadkar accused socialists of wanting to turn religious people into pariahs.

He said that, while he believed in separation of Church and State: “I do not believe in the socialist ideology, which is to push religion out of the public space and force people who are religious to be ashamed they have religious convictions.

“The policy of socialists is to take away that funding because they do not just believe in the separation of Church and State - they want to turn religious people into pariahs, put them in a corner and hide them and take away funding from institutions.”

He said they wanted to “hide” religious people “in a corner and to defund bodies and take public funding away from bodies such as the Vincentian Partnership for Social Justice, the Society of St Vincent de Paul, Crosscare, Trócaire and Concern”.