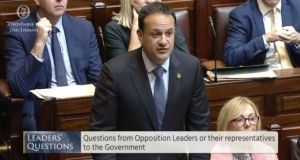 Leo Varadkar: “We have much more to do and it’s going to take many more years”

They didn’t bother with a cake or anything like that.

And there wasn’t a hint of many happy returns in the air. But opposition TDs didn’t let the occasion of Leo Varadkar’s first anniversary as Taoiseach go unmarked.

Technically, they were a little early but, as he doesn’t do Leaders’ Questions on Thursday, his milestone moment was noted a day in advance.

Not even 40 years old yet and already a year in the top job.

The Opposition members are deeply unimpressed and happily sneered their best wishes to him from across the floor.

It was Catherine Murphy of the Social Democrats who mentioned Leo’s political landmark.

“A year ago this week you became Taoiseach and told us of your vision for a republic of opportunities,” she reminded him, pointing out that his anniversary has coincided with a visit to Ireland from Leilani Farha, who is the UN Special Rapporteur on adequate housing.

“Ms Farha had one clear message, and that is that Ireland is failing abysmally when it comes to housing,” Catherine told him.

And speaking of the republic of opportunities, she threw in the latest comments from the Children’s Ombudsman who has described the position of almost 10,000 people in emergency accommodation as “shameful”.

So how does Leo feel about the housing crisis getting worse since he took office and what does he intend to do to address this unacceptable situation?

The Taoiseach rose to his feet and, naturally, began his response by ignoring the substance of the question. You don’t spend 12 months in the Taoiseach’s office and not learn a thing or two about talking down the clock in the Dáil.

“It is indeed a year tomorrow – it’s my anniversary of my election as Taoiseach.”

Leo wittered on. “I have to say, eh, I’m not, I’m not one for anniversaries or birthdays. I’m known to forget them or very often decline to celebrate them.”

But Leo wasn’t finished. “I think the milestones that are important are not the ones that appear on a calendar - they are the things you’ve achieved along the way.”

And on he went.

“I am very proud to have been part of a Government in the past year that has successfully brought about a referendum to repeal the Eighth Amendment, has at long last ratified the UN Convention on the Rights of Persons with Disabilities, has brought employment to record levels – the highest ever. . .”

There was hardly a dry seat in the House.

“A lot more to do!” chortled Sinn Féin’s Sean Crowe.

Leo pressed on with his greatest hits. But he was performing for a tough crowd.

Róisín Shortall of the Soc Dems told him to get on with it. “Answer the question and stop trying to run down the clock.”

Finally, Leo got around to the question, sounding like he’d swallowed Fianna Fáil’s 2002 “A lot done. More to do” election manifesto for breakfast

As a derisory chorus of “more to do!” rang around the chamber, the Taoiseach continued singing his own praises.

“. . . has balanced the books, has improved living standards, has reduced income inequality, has reduced poverty and reduced deprivation . . .”

Finally, Leo got around to the question, sounding like he’d swallowed Fianna Fáil’s 2002 “A lot done. More to do” election manifesto for breakfast.

Delivering a searing insight into how to tackle the homeless crisis, Leo declared: “What we actually need to do is build more houses and the crux of the solution to this is increasing housing supply.” Since he became Taoiseach, planning permissions and commencement notices are up by 30 per cent, while the construction of 18,000 new homes has started in the past year, he added.

“What about social housing?” demanded Sinn Féin’s Dessie Ellis as the anniversary boy continued his recitation. “More so than any year in the past 10. ESB connections again up 30 per cent, employment in the construction sector up 14 per cent.”

In the year to come, his Government will be adding up to 8,000 new social homes, promised Leo, flushed with success after his fabulous year.

“So we have a long, long way to go yet . . . We are finally starting to catch up and we’re starting to see that now in the figures. But the Deputy is absolutely right, we have much more to do and it’s going to take many more years.”

Catherine Murphy thought it would be a good idea if the Taoiseach formally met Leilani Farha to discuss housing policy as she has some tangible solutions around developing a coherent housing strategy, especially in areas such as the private rental sector.

Leo wasn’t against the idea, although he knows Minister for Housing Eoghan Murphy has already met her. Although Leilani “at the time, hadn’t had the chance to read Rebuilding Ireland, so perhaps, as part of that engagement, we could get her views on Rebuilding Ireland and what she thinks of that.”

Some gals have all the luck.

And, still with the Varadkar landmark date, Independent TD Tommy Broughan was also looking to rain on Leo’s parade.

“Taoiseach, is it not a characteristic of your first year in office that we are having a growing breakdown of law and order?” he asked.

“It seems as though almost every day of the week now we have an appalling murder or homicide,” observed Tommy, taking out a big pin to burst Leo’s happy anniversary balloon. “It’s astonishing, isn’t it, that Fine Gael is presiding over this growing lawlessness and appalling homicides and appalling criminal behaviour. What are you going to do about it?”

No, it is not astonishing, sniffed Leo. Furthermore, the number of gardaí has never been higher.

He told Tommy he was “misinformed and out of date”.

And anyway, it isn’t even his anniversary.