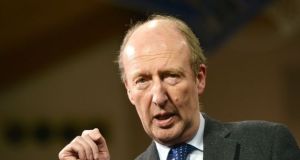 Minister for Transport Shane Ross has previously quetioned Mari Hurley’s appointment to the board of Nama.

Minsiter for Transport Shane Ross has raised concerns about a re-appointment to the board of Ervia.

The Cabinet agreed to approve Mari Hurley for a second term on the board of the utility company.

However, Mr Ross told the meeting Ms Hurley was a trustee for Fine Gael and said such should be made known when considering board appointments.

While it is understood he did not object to the appointment, the Minister said he believed this information should be made available in a more transparent fashion.

There was little support for his position at the Cabinet meeting, it is understood.

Mr Ross had previously questioned Ms Hurley’s appointment to the board of the National Asset Management Agency in 2014, when he was a columnist for the Sunday Independent.

At the time, he said Ms Hurley had worked for Fine Gael from as far as back as 1997 and questioned the decision of former minister for finance Michael Noonan to make the appointment.

Ms Hurley was appointed to the board in June 2013 and is a non-executive director.

She is a member of the audit and risk committee and the remuneration committee. Ms. Hurley was appointed to the Board of Nama in April 2014.