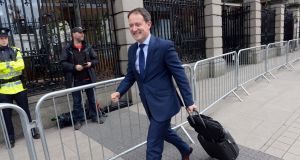 Minister for Health Simon Harris has rowed back on a provision that alcohol products must display large sized health warnings on their labels, to satisfy a European Commission ruling.

Mr Harris will introduce an amendment to the Public Health (Alcohol) Bill to delete a provision, that health warnings including those linking alcohol and fatal cancers, must take up a minimum of one-third of the label on cans and bottles of alcohol.

Labour party TD Seán Sherlock introduced a similar amendment but went even further and called for the deletion of provisions that include warnings linking alcohol to cancer in advertising, even though his party colleague Senator Ged Nash championed the provisions in the Seanad.

The Irish Cancer Society has strongly criticised Labour’s decision to propose removing its own amendment to the Bill, describing it as a “stunning U-turn”. The Commission has ruled, following complaints by alcohol manufacturers in a number of EU member states, that having warnings of that size was “not proportionate” and went beyond what was necessary to meet the Government’s health objective.

Mr Harris has insisted he is committed to the inclusion of health warnings about cancer and alcohol on labels and in advertising.

One of Mr Sherlock’s amendments mirrored the Minister’s to delete the requirement that “at least one third of the printed material (on bottles of alcohol) will be given over to evidence-based health warnings”.

The Cork East TD said he was not against health warnings as such but “one third of a label is just going to kill smaller batch producers from a cost control point of view, particularly those who arrived on the market in the last five years or so”.

However he also introduced amendments to delete the requirement that all bottles of alcohol sold in the State must have a warning “that is intended to inform the public of the direct link between alcohol and fatal cancers”.

He has also introduced an amendment to delete a provision where all alcohol advertising, including billboard and TV advertisements as well as alcohol labels, must display a warning linking alcohol to fatal cancers.

His third amendment calls for the deletion of the requirement that notices in pubs and licensed premises must include warnings noting evidence-based links between alcohol and fatal cancers.

It is understood the issue was not raised or discussed at any recent parliamentary party meeting.

Mr Nash and Independent Senator Frances Black championed the warning and labelling provisions when the legislation went through the Upper House.

The Bill goes to committee stage in the Dáil on Wednesday next week.

Mr Nash said he had not spoken directly to Mr Sherlock about it but “I know that Sean has a different view on it and he is entitled as a member of the Dáil to introduce his own amendment”.

Asked if he was disappointed with his colleague’s amendments Mr Nash said “I put my views on this on the record in the Seanad on this a number of months ago. We got considerable support on it. I’m not going to express disappointment on it one way or the other.”

He added: “The amendment was passed by the Seanad but it is absolutely the entitlement of the Dáil to express a view on it.”

The legislation is the first Bill to deal with alcohol as a public health issue, rather than a licensing or justice and road traffic issue.

The Bill introduces minimum unit pricing which ends below cost selling of alcohol in supermarkets and other retail outlets. It also bans alcohol advertising on public transport and at bus and train stations, and within 200 metres of schools and playgrounds.

The Bill also forbids alcohol advertising on television before the 9pm “watershed” and adverts can only be shown in cinemas for films with an over 18 rating.