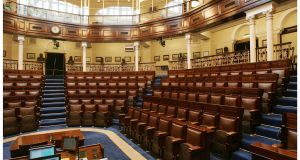 Micheál Martin, Leo Varadkar, Mary Lou McDonald and Eamon Ryan are all expected to put their names forward for Taoiseach when the new Dáil meets for the first time on Thursday. File photograph: Alan Betson

A deal that would lead to a new government being formed may not be finalised until April, Fianna Fáil leader Micheál Martin has told his TDs and Senators.

Mr Martin told a meeting of his parliamentary party, on the eve of the first sitting of the 33rd Dáil on Thursday, that it could be two months before a new government is formed.

His comments come ahead of what is highly likely to be an unsuccessful vote by the Dáil for a new taoiseach at the first sitting of the House since the general election.

None will come close to the required 80 Dáil votes to succeed, with tentative negotiations on forming a new government ongoing.

Ms McDonald may attract the support of some left-wing TDs and left-leaning Independents as she continues with her efforts to form a Sinn Féin-led minority government. Her party’s negotiating team is continuing its meetings with Independents and others.

The brief meeting of the Fianna Fáil parliamentary party in Leinster House on Wednesday evening also heard Mr Martin tell his TDs that substantive talks will get under way with the Green Party next week. The Greens will also meet Sinn Féin and others.

He cautioned, however, that the process of forming a government would be lengthy and noted that numerous parties would need to hold special conferences to ratify any deal or programme for government that is agreed.

“He said it could be April,” one TD present at the meeting said. Mr Martin did not, however, reference any talks with Fine Gael or any prospect of entering government with Mr Varadkar’s party.

Mr Varadkar this week said he wanted Fine Gael to go into opposition but did not rule out an alliance with Fianna Fáil. Senior Fine Gael figures claim the party will not engage seriously in such government formation talks unless another election must be avoided.

Senior members of the party have privately speculated that the coming weeks could also see President Michael D Higgins refuse a request to dissolve the Dáil. Fine Gael sources say that sharing the office of taoiseach will be a minimum requirement of any so-called “grand coalition”, which would also need the co-operation of the Greens and others.

Green Party figures, however, cautioned against being taken for granted and said the party rank and file could reject a coalition that sees it as the only political party with Fianna Fáil and Fine Gael.

Debate on the path ahead is also continuing in Fianna Fáil, with some TDs quietly questioning the wisdom of an alliance with Fine Gael, claiming it could significantly damage Fianna Fáil among working and lower middle-class voters.

Some TDs also privately believe Mr Martin was too hasty in ruling out Sinn Féin, although most are strongly against working with Ms McDonald. Mr Martin has repeatedly ruled out working with Sinn Féin.

The Dáil will also elect a ceann comhairle on Thursday by secret ballot. There are two candidates for the post: Kildare South Fianna Fáil TD Seán Ó Fearghaíl, who held the position in the last Dáil, and Independent Roscommon-Galway TD Denis Naughten.

If Mr Ó Fearghaíl is elected, it will reduce Fianna Fáil’s number of TDs from 38 to 37. This would put Mr Martin’s party level with Sinn Féin in Dáil numbers. Fine Gael has 35 seats.

Body of woman found in house in Killiney, south Dublin