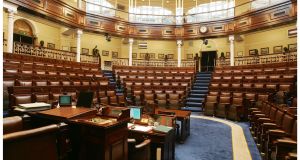 The 33rd Dáil will convene at noon on Thursday, with all newly-elected TDs taking their seats for the first time since the general election on February 8th.

What will be the first item of business in Leinster House?

Proceedings will open with Peter Finnegan, the clerk of the Dáil, reading the proclamation from President Michael D Higgins convening the 33rd Dáil. Mr Finnegan will then read the report on the issuing of the writs and the names of every TD elected in each constituency.

When does the election of a ceann comhairle take place?

The election of a ceann comhairle is the next item after Mr Finnegan reads the names of all members of the Dáil into the record. Each candidate will make a five-minute speech outlining their pitch for the position.

After that, Mr Finnegan will announce that the Dáil will proceed to a secret ballot and the division bells will be rung for six minutes. The doors of the Dáil chamber will be locked at the end of the six minutes and TDs will cast their votes in private booths in the voting lobbies, with ballot papers then deposited in ballot boxes.

Voting will be done under the single transferable vote system of proportional representation (PR-STV) and will be open for 90 minutes or until all TDs have voted. The House will still be in session for this period but will be adjourned to count votes. The count will be carried out in a room near the Dáil chamber and, once it is concluded, the clerk will announce a winner and say that the House will resume at a specified time. The Dáil, when resumed, will then formally approve the new ceann comhairle.

This will only be the second time a ceann comhairle will have been elected by secret ballot. Seán Ó Fearghaíl, who is seeking re-election, was the first person elected under the new system at the beginning of the 32nd Dáil in March 2016. Before that, holders of the position were nominated by party leaders and ratified by the Dáil, effectively meaning the position was in the gift of the incoming taoiseach.

As well as being the speaker or chair of the Dáil, the ceann comhairle is also chair of the Dáil’s Committee on Procedures and Privileges and the Houses of the Oireachtas Commission, the body responsible for running Leinster House. The pay and conditions for the position are on a par with a Cabinet minister. The total salary is €175,699 and the holder of the office also has the service of a full-time driver funded by the State. The ceann comhairle is also automatically returned to the next Dáil.

When does a vote on taoiseach take place?

The ceann comhairle will make some remarks after being elected, followed by the taoiseach and party leaders. After that, the Dáil will hear nominations for the position of taoiseach and this is expected to begin at about 5pm.Votes on the four expected nominees – Micheál Martin, Fianna Fáil; Mary Lou McDonald, Sinn Féin; Leo Varadkar, Fine Gael; and Eamon Ryan, Green Party – will then take place.

What happens if the Dáil fails to elect a taoiseach?

1 Coronavirus: Cabinet to assess ‘stay at home’ measures as 50,000 deaths expected worldwide
2 ‘Everyone still thinks it’s a joke’ - parents of toddler with coronavirus speak out
3 Coronavirus: Should everybody be wearing masks to combat Covid-19?
4 ‘It’s Sinn Féin against the rest’: NI Executive in conflict over coronavirus
5 Coronavirus: Trump’s tone changes as US faces brutal loss of life
Real news has value SUBSCRIBE