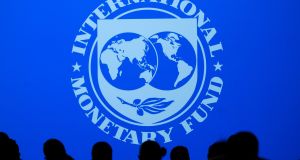 The IMF upgraded its headline growth forecast for the global economy to 5.5 per cent in 2021 and 4.2 per cent in 2022. Photograph: Andrew Cabellero-Reynolds/AFP via Getty Images

The International Monetary Fund (IMF) expects the US and China to experience a quicker economic recovery from the pandemic than Europe and other parts of the world.

In its latest World Economic Outlook, the Washington-based fund forecasts that by 2022 recoveries in the the US and China will leave their respective economies no more than 1.5 per cent smaller than projected before the pandemic.

Other advanced economies will still be 2.5 per cent short of their pre-pandemic path, while emerging economies excluding China will in 2022 be 8 per cent smaller than expected in forecasts issued exactly a year ago.

The reasons for the quicker recoveries in China and the US, the world’s two largest economies, are sharply divergent, however.

China will recover quicker on account of aggressive containment measures to curb the spread of the virus, while the US, which has struggled to contain the virus, has spent more on an economic stimulus than nearly any other country.

In its report, the IMF warns that rising infection rates, new virus variants and vaccine distribution problems have muddied the global economic outlook. It said multiple vaccine approvals and the launch of vaccination programmes in several countries had raised hopes of an eventual end to the pandemic.

However, “surging infections in late 2020 (including from new variants of the virus), renewed lockdowns, logistical problems with vaccine distribution, and uncertainty about take-up are important counterpoints to the favourable news.”

Its 2021 forecast was revised up 0.3 per cent relative to the previous forecast, reflecting expectations of “a vaccine-powered strengthening of activity” later in the year.

It also noted that economic growth had been stronger than expected in the second half of 2020 as consumers and businesses adapted to what it called “subdued contact-intensive activity”.

It estimates the global economy contracted by a smaller-than-expected 3.5 per cent in 2020.

“The projected growth recovery this year follows a severe collapse in 2020 that has had acute adverse impacts on women, youth, the poor, the informally employed, and those who work in contact-intensive sectors,” it said.

In its report, it said a softening of activity in early 2021, predicated on renewed lockdowns in many countries, is expected to give way to rising momentum in the second quarter as vaccines and therapies become more readily available.

However, it warned recovery would vary significantly across countries, depending on access to medical interventions and effectiveness of policy supports.

The fund said policy actions should kept in place until the recovery is firmly underway.

On Monday, Minister for Finance Paschal Donohoe told a European Parliamentary committee there must be no “cliff-edges” in the removal of financial supports for workers and businesses impacted by the Covid crisis.

In its report, the IMF said strong multilateral co-operation was required to bring the pandemic under control “everywhere”.

That meant “ensuring universal distribution of vaccines, and facilitating access to therapeutics at affordable prices for all”, it added. - Additional reporting The Financial Times

5 Who was Richard Cantillon?