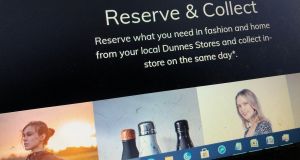 A screengrab of the ‘reserve-and-collect’ service Dunnes Stores was offering on its website.

Dunnes Stores has removed all references to a “reserve-and-collect” service for clothes and homewares from its website after being asked to explain how the new service differed from "click-and-collect” operations prohibited for non-essential retail under Level 5 lockdown regulations.

Advertised prominently on its site until Monday night as a “new local store service” the retailer’s reserve-and-collect option allowed shoppers to “reserve what you need in fashion and home from your local Dunnes Stores and collect in-store on the same day”.

Dunnes Stores said it was a “local store service” and it promised to do “everything we can to fulfil your reservation request from our store. We will contact you in advance of collecting your orders and notify you of what we have been able to fulfil.”

When contacted by The Irish Times and asked to explain how reserve-and-collect differed from click-and-collect, the retailer declined to comment.

The Department of Enterprise confirmed to this newspaper on Monday night that click-and-collect and reserve-and-collect for non-essential retail items were against regulations which are designed to slow the spread of Covid-19.

A spokeswoman said the guidelines were “clear that click-and-collect or reserve-and-collect services are only available for essential retail items”, adding that the department has been “engaging with retailers to ensure Covid-19 guidelines are followed”.

Within 12 hours of receiving the Government statement the service was no longer being offered by Dunnes Stores. It has not responded to queries as to why it was discontinued.

During the second lockdown in October and November, non-essential retailers were allowed to sell online as well as offer a so-called click-and-collect service.

It allowed many smaller retailers who did not have the capacity for full online delivery services to continue to trade through November.

With Covid-19 case numbers surging at the end of December, however, non-essential retail was forced to close for the third time in less than a year and the Government decided not to allow the click-and-collect model so as to reduce movement and travel as much as possible.

It was felt that by taking that option off the table it would stop people driving to retail and town centres to pick up ordered goods and would reduce the movement of people in the community.

Last October large retailers across the State, including Dunnes Stores were forced to modify their stores and block off products deemed non-essential in the wake of widespread Garda interventions aimed at ensuring they were in compliance with lockdown rules.

Some clothes and shoe shops tried to circumvent the rules by stocking and selling PPE while selling clothes alongside food and other essential supplies.