Checkpoints within 5km of Border, going to North may require passenger locator form 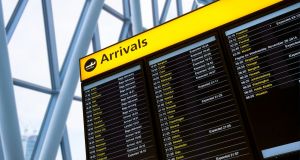 The legal and operational arrangements for mandatory quarantine in a hotel, which will be introduced for arrivals from some countries and those without a negative PCR test on arrival, are still being prepared by the Department of Health. Photograph: iStock

Cabinet has signed off on an extension of current Level 5 Covid-19 restrictions until March 5th, as well as a range of measures designed to curtail travel into the State.

However, Government sources cautioned that it could be some time before many of the measures are brought into place due to a range of complexities around the new policies.

It is understood that the Cabinet was warned that there are issues around the legal and practical approaches to implementing some of the new policies, including mandatory hotel quarantine, and shifting self-quarantine at home onto a mandatory rather than advisory footing.

Government sources told The Irish Times that it “will take weeks to operationalise all of it”, with primary legislation needed, some EU citizens rights issues, as well as practical issues around quarantine centres, testing, sealed transport and medical support at the airports all to be ironed out.

Under plans that went to Government, increased communication, Garda checkpoints on routes near ports and airports, and checks on returning passengers are all in store. Introduction of mandatory quarantine in dedicated facilities for those arriving from South Africa and Brazil, as well as those without PCR tests, has also been approved.

The Government has also agreed to examine putting the current advice on restricting movements at home for recently returned travellers on a mandatory basis, although this will be subject to legal consideration.

Those travelling into the State and onto Northern Ireland, will now have to fill out all parts of the passenger locator form, while the current travel regulations applicable to people travelling to Ireland from overseas will be extended to those who enter via the North.

The Government also plans to conclude data-sharing arrangements with the Northern Ireland Executive, and continue discussions with Stormont and the UK generally on aligning travel policies.

Senior officials are to examine whether there could be a legal ban on non-essential travel into the State, which could apply to a subset of countries or more generally.

The Cabinet was briefed on the proposals to be examined by the Senior Officials Group – a group of high ranking civil servants who examine the implications of Covid policy – this morning, which are not under consideration for approval by the Ministers today and remain at an exploratory stage, Government sources said.

The officials will also consider engaging with airlines about the advertisement of flights that would involve passengers breaking rules on non-essential travel overseas.

Tánaiste Leo Varadkar said on Monday night the Government’s plans were to suppress the virus to very low levels. He said the easing of restrictions would happen very, very slowly and the time would be used to get as many people vaccinated as possible.

Schools will be reopened as early as possible, sources said, but the current discussions with unions focus around a phased return for children with special educational needs first.

An advisory group will meet this week to discuss contingency plans for the 2021 state exams and these options will be further examined by a Cabinet committee next week before a full Government decision.

Confidential talks are currently continuing with the unions in respect of a return to school for children with additional needs.

Ministers were told this morning maintaining the reproductive level at its current rate of between 0.5 and 0.8 will be increasingly difficult as the UK variant becomes more widespread. There will also be a significant number of Covid-19 deaths in the coming weeks, Cabinet heard.

Fears were also expressed about general public compliance with concerns that the current levels of low social contacts will be difficult to sustain.

On contact tracing, it is understood Ministers were told that despite decreasing numbers of social contacts, the contact tracing system is not at a stage yet where it can resume normal business.

Ministers have been told detailed work still needs to be undertaken on several key travel reforms under consideration.

The Cabinet was told the detailed legal and operational arrangements for mandatory quarantine in a hotel, which will be introduced for arrivals from some countries and those without a negative PC test on arrival, are still being prepared by the Department of Health, albeit urgently.

Meanwhile, Ministers were told that the proposal to make quarantine at home mandatory is also subject to the consideration of legal issues involved.

Elsewhere, it is understood that people going on to Northern Ireland will have to fill in the passenger locator form to include their address, under new travel restrictions.

Legislation will also be introduced for the first time to impose fines on people travelling from the northern jurisdiction who are not essential workers.

In an effort to reduce unnecessary travel one of the new restrictions under the extended Level 5 restrictions is that checkpoints will be set up by gardaí 5km from the Border with Northern Ireland.

Travellers without a negative test will also face a fine of up to €2,500 indoor up to six months’ imprisonment, while returning holidaymakers will face increased fines.

For the first time, all incoming passengers will face a legal requirement to self-isolate after arrival with criminal sanctions for breaches. Until now, while the advice has been for arrivals to self-isolate, it has had no legal basis.

In addition, authorities in the Republic and Northern Ireland have agreed to share some data in relation to passengers for the purposes of curbing the spread of the virus on both sides of the jurisdiction.

For the first time, those who arrive from abroad into the State via Northern Ireland will also face punitive sanctions – including fines or imprisonment – if they fail to self-isolate for 14 days.

“The effect of all of this will be to reduce the volume of international travel to Ireland to a dribble,” said a source familiar with the discussion.

The source said the move would stop Irish holidaymakers from travelling abroad during the pandemic and British citizens from flying into Dublin and then using the North as a backdoor.

There is evidence that some 2,500 people have travelled from the State to Spain during January, some of whom have been holidaymakers. Checkpoints will continue to operate near airports and sea ports to ensure that people are not travelling abroad for no-essential reasons.

However, Ministers decided against recommending a mandatory quarantine on all travellers similar to the regime in place in Australia, New Zealand and parts of east Asia.

Travel from South Africa and Brazil will be halted temporarily, with Ministers told that gardaí will mount increased checks at airports and ports.

But there appears little prospect of a joint approach with the Stormont administration, despite phone calls between Taoiseach Micheál Martin and the Northern First and Deputy First Ministers, Arlene Foster and Michelle O’Neil, on Monday.