Tributes to Dublin doctor who died with Covid-19

If death officially attributed, Paul McDermott (57) would be first GP to die of coronavirus 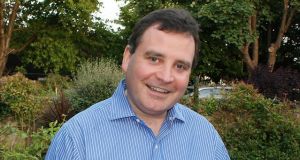 Paul McDermott, a GP who died with Covid-19. Photograph courtesy of the family

Tributes have been paid to a long-serving GP from Rathfarnham in south Dublin following his death with Covid-19 earlier this month.

Paul McDermott (57), who treated patients from his surgery on Glendoher Road for more than 20 years, tested positive for the virus after his sudden death at home in early January.

The family are awaiting the result of a postmortem, according to his brother, Ray, who said Paul had been treating patients with the disease in the weeks before he died.

His death interrupts a family medical tradition in the area that stretches back more than half a century. His mother, Sarah MacAuley, opened a GP surgery in Rathfarnham in the late 1960s.

“Paul, along with my mother, worked for many years in the community; she for 50 years now, and he for over 20,” said Ray McDermott,who is an oncologist.

Sarah continued to work alongside her late son until recently, despite being in her 90s, he added. “Between them, they gave many lifetimes of service to patients, whose appreciation came through in the messages we have received since Paul’s untimely passing.”

Hundreds of former patients, colleagues and friends of Dr McDermott have paid tribute to him online. One former patient described him as “kind, loyal, warm, witty and compassionate”. Another said “he was more than a family doctor, he was a friend and confidant, irrespective of how busy it was”.

Ray said his brother tested positive when swabbed after his death and was buried in accordance with strict Covid-19 protocols.

Paul attended Terenure College, studied medicine in UCD and trained in hospitals in Dublin and Scotland after qualifying in 1990. He had worked at Rathfarnham Medical Practice since 1999.

Deaths are counted as Covid-19 deaths if confirmed by a positive test or if, in the view of a medical practitioner, the virus played a role in a person’s death.

If his death is officially attributed to Covid-19, it will be the first of a GP in this pandemic. According to official figures, 11 healthcare workers have so far died with the virus, including one hospital doctor.

Among the most recent healthcare worker deaths are Mariter Tarugo, a healthcare assistant at St Vincent’s Hospital in Dublin; and Bernie McAndrew, a nurse in Belmullet, Co Mayo.

More than 6,800 healthcare workers have been infected with Covid-19 since Christmas, one in 10 of all positive cases.