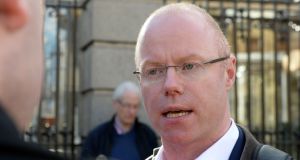 Stephen Donnelly has said he cannot believe Customs officers have been asked to halt their efforts to come up with ways to ensure an open Border after Brexit. Photograph: Eric Luke

Taoiseach Leo Varadkar’s order to Revenue officials to stop investigating technological Brexit solutions such as electronic monitoring has been described as “reckless” and “dangerous” by Fianna Fáil’s Brexit spokesman.

Stephen Donnelly said he could not believe Customs officers had been asked to halt their efforts to come up with ways to ensure an open Border when the United Kingdom leaves the European Union.

“If it is the case that Irish officials in Revenue and other parts of the State have been directed to stand down in terms of Brexit preparation and scenario analysis, then to my mind that would be extremely reckless behaviour,” Mr Donnelly said.

“It would be legitimate for the Irish Government to conduct a thorough analysis and not publish that analysis. But to walk into negotiations not having done the analysis would be dangerous and would put jobs at risk.”

A Government spokesman confirmed recently the work, which began under former taoiseach Enda Kenny and ex-minister for foreign affairs Charlie Flanagan, was no longer continuing.

Mr Donnelly said it was most unlikely Revenue officials could have completed their work before Mr Varadkar gave instructions for them to stop.

“It couldn’t be complete because Brexit is a moving target and the analysis required changes on a weekly basis.”

The Wicklow TD also said he was “unimpressed” with the Brexit solutions Mr Varadkar outlined in his speech at Queen’s University Belfast last Friday.

The Taoiseach identified three possibilities: an EU-UK customs union similar to that between the EU and Turkey; the UK rejoining the European Free Trade Association whose members include Norway and Switzerland; and a long transition period while Brexit problems were worked out.

“Over a year since Brexit, it should be much more sophisticated than copying Turkey, Norway or Canada. We were there the day after the Brexit vote,” Mr Donnelly said.

Mr Varadkar has been widely praised within Fine Gael for adopting more robust rhetoric on Brexit.

However, asked about Government’s change of tone, Mr Donnelly said: “It’s not our job to lecture unionists. What we need is straight talk. What we’ve seen so far is clumsy diplomacy alienating the unionist community.”

DUP MP Jeffrey Donaldson has complained about Mr Varadkar’s move. “Sensible work to achieve practical and mutually beneficial arrangements for the Border after Brexit have been stopped on Leo Varadkar’s orders,” Sir Jeffrey wrote in an opinion piece in The Irish Times last Saturday.

A Revenue spokeswoman said its current work in relation to Brexit was focussed on “the full range of possibilities”, including that customs controls or processes will apply between Ireland and the UK.

“Our focus is on facilitating trade by maximising the free flow of goods. We are aiming to have the most advanced systems possible and we will continue to maximise the simplification provided for within the Union Customs Code.”