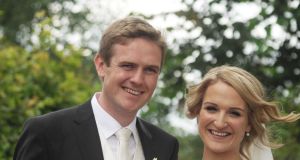 Minister of State for European Affairs Helen McEntee has married her long-term partner Paul Hickey in a private ceremony at her parish church in Co Meath.

The groom, from Castlecoote, Co Roscommon now works in health economics. The couple have been engaged since January 2016.

None of Ms McEntee’s Government colleagues were present at the ceremony on Monday which was attended by the couple’s family and friends, with an estimated 350 guests celebrating the wedding in Cabra Castle, Co Cavan.

Ms Mc Entee was elected a Fine Gael TD for Meath East in a byelection following the death by suicide of her father, the late minister of state Shane McEntee in December 2012.

Her brother Vincent walked her down the aisle at St Patrick’s church in Castletown near Nobber, and both Mr McEntee, and Mr Hickey’s late father Paddy Hickey, were remembered in prayer during the ceremony celebrated by Fr Michael O’Brien.

The bride wore a backless ivory dress with deep neck-line and net skirt. Her four bridesmaids, led by her sister Sally, wore gowns in blush pink.

The newly-weds will spend their honeymoon in the US.

Just before the nuptials, Ms McEntee said: “I’ve been looking forward to our wedding day for months now and at last, it’s finally arrived, though I was a bit nervous earlier.

“We’ll have a great day, rain or shine, celebrating with family and friends who have come from near and far to join us today. That’s the main thing.

“We’ve received so many best wishes this morning from people all over the country, which has all been so overwhelming.”