HSE to get integrated software system 14 years after idea proposed 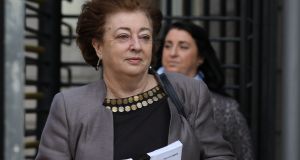 Social Democrats TD Catherine Murphy has persistently questioned the difficulty in getting information in a timely fashion from the HSE about its services and funding. Photograph: Collins Courts

The Health Service Executive is to get a single, integrated IT financial management system, 14 years after it was first recommended.

The health service currently operates off nine different systems, a hangover from the health boards in existence up to the executive’s formal establishment on January 1st, 2005.

The contract is estimated at €30 million “over its term”, a HSE spokeswoman confirmed.

The executive will “start to deploy this software in 2017” but the spokeswoman added that “this project is expected to take a number of years to complete as part of the overall finance reform programme”.

Mr O’Brien said this was the system they should have got when the HSE was established but it was never put in place and the service was “systematically starved of the types of systems it would need in order to be an effective single national organisation”.

He said a 2003 report by a commission led by Prof Niamh Brennan, one of two reports prepared in the run-up to the establishment of the HSE, outlined the financial systems needed to provide “effective information flows and financial control in a nationally organised health service.”

The second report, known as the Prospectus report, recommended the establishment of the HSE.

Social Democrats TD Catherine Murphy has persistently questioned the difficulty in getting information in a timely fashion from the HSE about its services and funding, a complaint echoed by most TDs.

She described it as a rare good news story for the HSE.

The Kildare North TD said that, following delays in responding to a question she had asked in relation to costs , she had been told by the HSE that it was operating from seven different ledgers.

She said it was difficult for the HSE given the job they had to do and it was “completely unacceptable” that that an integrated system was not already in place to give the HSE an overview and allow it to analyse and compare costs of various services and programmes across the system.

When she raised the issue at an Oireachtas Public Accounts Committee meeting in June, the HSE boss told her that there is no single financial system.

The HSE “was created out of 54 different organisations”, and “there are about eight or nine visible organisations inside in system terms and that makes it difficult”.

He said it was frustrating trying to run the HSE on this multiorganisation system. “It feeds into issues of procurement, staff and all sorts of financial management.”

Chief financial officer Stephen Mulvany told the same meeting the approval for the system was the final sanction needed to sign a software contract for a single platform for finance for the next 10-20 years but “there is still another three- or four-year journey at least to design across the system”.

Asked about measures to ensure the project did not turn out like the controversial Ppars health payroll and personnel system that cost €131 million, the HSE spokeswoman said the health service’s finance reform programme “has the appropriate governance and project management processes in place to manage this programme of work”.