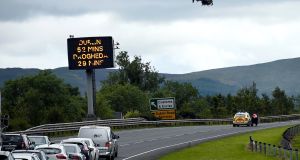 ‘After a year of exploring technological Border solutions, the Government has suddenly lost faith in this approach.’ Photograph: Clodagh Kilcoyne/Reuters

The movement of goods across the Border following Brexit is a problem of smuggling, not customs facilities.

Without smuggling, customs requirements for even the hardest Brexit could be – to use the dreaded term – frictionless.

After a year of exploring technological border solutions, the Irish Government has suddenly lost faith in this approach. One irony of its U-turn is that the entire European Union is working towards an electronic customs frontier.

All over the globe, customs procedures are being rapidly standardised and moved online via a framework introduced a decade ago by the World Customs Organisation. Any business can apply for customs and security accreditation by becoming what is known as an authorised economic operator (AEO).

In the EU, this has been used since 2008 to license trusted importers and exporters. To qualify, they must have a “good history” of tax and customs compliance, record-keeping and solvency. AEOs can access pared-down customs and shipping procedures. After 2020 they will be able to self-assess and perform all their customs activities.

The point of international standardisation is for different trading blocs and countries to start recognising each other’s AEOs. In 2014, the EU signed a reciprocal agreement with China. It is negotiating another with the United States and a spate of similar arrangements should follow. At the start of this year, the EU opened its AEO programme to 92 developing nations, allowing firms in those countries to register online.

Because the UK uses the EU’s accreditation system, mutual recognition should be straightforward – it is realistic to hope this could be in place for the 2019 Brexit deadline, despite London’s general disarray.

If every UK and Irish firm with a cross-border supply chain became an AEO, Brexit would still give them an administrative task and a tariff burden – potentially an enormous one, in the case of agrifood. However, the practical operation of their businesses would be unaffected, unless there was a dramatic regulatory divergence. Nothing should get stuck in warehouses or lorries on the border, awaiting an inspection or a rubber stamp.

Nobody envisages this level of trust eradicating physical inspections altogether. A sample of vehicles would still need to be stopped somewhere and AERs can still expect an occasional site visit.

But it is reasonable to aim for enough trust to address political concerns. Inspections near the Border might be reduced to the point where no nationalist could object; inspections at Northern Ireland’s ports might be restricted to vehicles coming to and from the Republic, so no unionist could fear a border down the Irish Sea.

The problem this brings us back to is the untrustworthy – and that goes beyond the truism of saying the rules would work perfectly if only everyone obeyed them.

The AEO framework is possible because the overriding purpose of customs facilities is now seen as the efficient collection of revenue, rather than the detection of evasion.

The subversion of a customs system by smuggling is increasingly a self-contained problem of law-enforcement, within the increasingly challenging field of organised crime. By the time an unregistered shipment arrives at an international port or approved border crossing – if that is where it arrives – years of investigative work may already have taken place simply to establish who is responsible, with years more ahead for any chance of a successful prosecution.

As a result, the actual border can be surprisingly irrelevant. A recent crackdown on UDA smuggling, for example, involved arrests and seizures of goods in east Belfast. What attracts smugglers is not so much a gap in the fence as differences in costs, taxes and regulations. Brexit will undoubtedly provide many more such opportunities in Ireland and precedent suggests the criminal justice systems North and South will be overwhelmed.

Most Irish smuggling is currently based on exploiting excise duties, which function like tariffs inside the EU. An EU-wide electronic system to manage duty-liable goods operates well – but does not prevent smuggling.

Since 2011, 60 people have been convicted of fuel smuggling in Northern Ireland, yet only one has gone to prison. Fuel smuggling – traditionally based right on the Border – continues to cost the UK £300 million (€335 million) a year.

This issue has its own political dimension, of course. Minister for Foreign Affairs Simon Coveney has repeatedly described Brexit as a threat to the peace process.

While only loyalists or dissident republicans might be a danger to customs officers, the republican mainstream connects smuggling directly to the doorstep of government. Last year, Gerry Adams described Thomas “Slab” Murphy as a “good republican”, after Murphy was convicted of tax evasion linked to a fuel smuggling empire.

Is the financial subversion of politics something Leo Varadkar had in mind two months ago when he said Sinn Féin “remains the greatest threat to our democracy”?