Leaving Cert: Up to 1,000 extra college places may be needed due to results error, Harris says 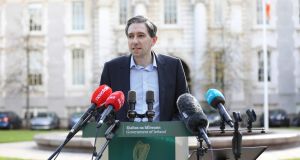 Up to 1,000 extra college places may be needed in light of the Leaving Certificate results errors, a meeting of the Fine Gael parliamentary party has heard.

Minister for Further and Higher Education Simon Harris said the Government will not know the exact number until a further review by Minister for Education Norma Foley, but that there were 3,000 successful appeals last year which resulted in 600 places being needed.

He said that if the figures would suggest that around 1,000 extra places could be needed in colleges.

If there is no such place available, Mr Harris said he would put in place all resources necessary to fund extra college places. He said he hoped that the full magnitude of the issue would be known by next week at which point students may receive new offers.

At the same meeting, the Minister of State in the Department of Education Josepha Madigan said that she only became aware of the issue on Wednesday.

One source present for the meeting said Ms Madigan was unhappy with the development.

The discussion came after at a press conference on Wednesday Ms Foley apologised for errors which resulted in at least 6,500 students receiving a lower grade than they ought to have received. This was due to an error in the code of the calculated grades system.

Meanwhile the party also unanimously supported a motion brought by Colm Burke to honour the commitments made previously by Fine Gael in Budget 2020 to reduce the prescription charge for medical card holders by €0.50 and the monthly threshold for the drugs payment scheme by €10.

The party had also promised to increase the medical card weekly income limit for people over 70 by €50 for a single person (to €550) and by €150 for a couple (to €1,050). The measures have yet to take effect. The motion was supported by Tánaiste Leo Varadkar.