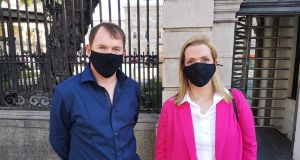 CervicalCheck campaigner Vicky Phelan with Solidarity-People Before Profit TD Gino Kenny TD outside Leinster House. The TD is tabling a private member’s Bill which would allow people with a terminal illness to be helped to end their lives. Photograph: PA

Ministers will this morning discuss delaying a contentious Bill, which would legalise “assisted dying” in the State, to allow a special Oireachtas committee to consider the issue.

The private member’s Bill, which would allow people with a terminal illness to be helped to end their lives, has been tabled by Solidarity-People Before Profit TD Gino Kenny .

It is due to come before the Dáil on Thursday, before being voted on for the first time next week.

Discussions were continuing between the three Government parties on the matter last night. Sources said that they were likely to decide against postponing the Bill for a year, and instead ask a special Oireachtas committee to hold hearings on the issue.

It is understood that a proposal to establish a Citizens’ Assembly to discuss the issue and make recommendations was not agreed, though some in Government favoured this route, citing the example of the referendum to remove the Eighth Amendment and to legislate for abortion.

Others doubted that another Citizens’ Assembly would be feasible during the pandemic despite suggestions that it could be held remotely. Some Government sources were also wary of being seen to long-finger the proposal.

None of the Government parties had taken a position last night on the issue of assisted dying, but there were strong indications from within Fine Gael and Fianna Fáil that they could allow members a free vote on the issue.

A Green Party official acknowledged there were “different views” in the party on how best to proceed.

Labour and the Social Democrats have signalled that they will facilitate the Bill’s progression, while Sinn Féin leader Mary Lou McDonald said yesterday that her party will support the principle of allowing people to be assisted to die and vote in favour of the Bill next week.

Ms McDonald said her party would support the Bill at second stage in the Dáil, but may seek changes to the proposed legislation at committee stage.

The second stage vote is the first vote on a new law, after a debate on the general principles of the Bill.

It can then be amended at the next stage, when it goes to the relevant Dáil committee for scrutiny.

“We’ve studied the legislation and we believe it requires further consideration, and it’ll have that any committee stage,” Ms McDonald told reporters at Leinster House.

But she confirmed that the party would vote to let the Bill proceed, endorsing the principle of assisted suicide, though she said she preferred to use the term “dying with dignity”.

She said it was a “very sensitive issue, a very emotive issue” and that it being on the political agenda was “a good thing”.

“We have to get this right and I think we have to listen very carefully, particularly to those families who are either living through an experience or who have had the experience of real, real heartbreak and real physical suffering in their families.”