Peace talks: PM told that taoiseach was using conversations for his own political ends 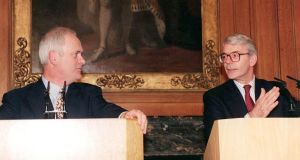 Former British prime minister John Major was “reluctant” to talk to then taoiseach John Bruton on the phone because their private conversations were always leaked, according to newly declassified files.

Senior British diplomats warned Bruton’s highest-ranking civil servant a number of times of Major’s “irritation” over the content of their confidential calls making its way into the newspapers.

Veronica Sutherland, then British ambassador in Dublin, reported back to the prime minister’s office in March 1997 – while both governments were trying to secure an IRA ceasefire and kick-start peace talks – that she had lunch with Paddy Teahon, then secretary general of the Department of the Taoiseach.

“Paddy expressed bemusement about the prime minister’s apparent reluctance to talk to the taoiseach,” she wrote.

In the diplomatic report, Sutherland said she told Teahon that she suspected Major was concerned “about the fact that whenever he spoke to the Taoiseach, this always appeared in the Irish press.”

“I asked Paddy to try and understand that, unless the prime minister could be sure that his conversations would receive no press coverage (other than by mutual agreement), then his concerns would continue.”

The alleged leaking was causing Bruton difficulties getting a much sought-after call with Major before a trip to Washington that year for the annual St Patrick’s Day celebrations, where the taoiseach would be talking to US president Bill Clinton about the stalled peace process.

In a memo to Major days before Bruton was to travel, the British prime minister’s private secretary and diplomatic advisor John Holmes reminds him that the taoiseach had been asking for a phone call but that “you were reluctant, given the way the Taoiseach used the conversation for his own political purposes last time”.

“I have discussed this again with Paddy Teahon, and he has talked to the taoiseach,” Holmes said to Major.

“The net result is more or less a promise that the taoiseach will not publicise what is said... so your conversation should be private, although the fact of it having taken place would no doubt come out.”

According to the memo, Bruton “does not seem to have a particular drum he wants to beat” but that he “just believes that it is sensible for you to talk from time to time” and he was anxious to “know your mind” before talking to Clinton.

Earlier in the month, Holmes told Teahon during a dinner meeting that “the high-profile use made of the last conversation with the press had caused irritation”, a note records.

Only after the assurances did a 25-minute call between Bruton and Major take place on March 13th, in which the taoiseach “wanted to discuss what he could say to president Clinton in Washington”.

“It was useful for him to say that he had spoken to the prime minister, even if they were not able to agree on anything,” a note of the call records.

Bruton proposed a number of measures to inject urgency into the stalled peace talks in the North, including a deadline for the negotiations, which Major worried “the awkward squad on either side could manipulate to their advantage”.

A note by Holmes describes the proposals as “a bounce from the Taoiseach”, with Downing Street not having been forewarned.

Holmes said he could not get hold of Teahon afterwards “as he was at Cheltenham for the day(!)”, and he appealed to the Northern Ireland Office to “start thinking rapidly” about how they would respond to Bruton’s ideas.

“I took steps after the conversation to try to ensure that as little as possible was said to the press about its contents by the Irish, given what happened last time. But I am not entirely confident about the results,” he added.

The day after St Patrick’s Day, Holmes sent a memo to Major saying Bruton “behaved himself in Washington.”

“He did not misuse the content of his telephone call with you,” he added.

Later that month, then ex-taoiseach Albert Reynolds sent a handwritten note to Major urging him to “write yourself into Anglo/Irish history” by naming a date for the IRA to renew its ceasefire and for Sinn Féin to join cross-party peace talks before an escalation in violence “spins out of control”.

“The British and Irish people will always be in your debt, for all the lives you will have saved,” Reynolds wrote in the warmly worded letter.

“There is no more noble deed you could have done. John, Good luck in the elections, and, whatever happens, we started something that won’t stop.

“Peace is a powerful message, whose time has arrived. Believe me, the time to move is now, and prove yourself once again to be a visionary leader.”

Major replied that there is “nothing between us on wanting to see an end to all violence for good, and to have Sinn Féin in the political talks”, but stressed the IRA first needed to call an “unequivocal ceasefire”.

The level of violence at the time “does nothing to enhance Sinn Féin’s credibility as a party committed to peace and democracy” and it was “up to them how quickly they reach that point, rather than for me to set a date”.

“The future is in their hands. I hope they will grasp the opportunity,” he added, signing off ,“Yours ever, John,” adding that his wife, Norma, “joins me in sending our very best wishes”.