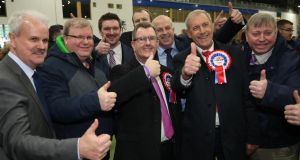 Lagan Valley was another safe DUP seat that delivered no surprises on election night, although, as in other constituencies, the incumbent was returned with a slimmer majority.

The sitting MP in Lagan Valley is Jeffrey Donaldson, one of the party’s highest-profile politicians. He has represented the constituency since 1997, with voters sticking with him through a switch from the UUP to the DUP for the 2005 general election.

Last time around Donaldson polled almost 27,000 votes, which took him into this election with an apparently unassailable majority of more than 19,000. If the percentage drop in the DUP vote was one of the stories in this election, then so too was the rise in the Alliance Party’s share. This was evident in Lagan Valley when Sorcha Eastwood of Alliance came less than 6,500 short of Donaldson, polling 13,087 to his 19,586.

Yet it was by any yardstick a comfortable win for Donaldson. Robbie Butler of the UUP, who had come second to Donaldson in 2017, was relegated into third place, whereas the Ukip candidate, Alan Love, trailed in with 315.

If there was a theme among candidates’ victory speeches, it was Monday’s talks aimed at restoring the power-sharing Northern Ireland Assembly ahead of the third anniversary of its collapse, and the determination voiced by all parties to see an agreement reached. Donaldson was no exception.