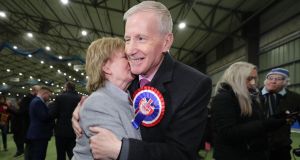 Going into this UK general election, East Derry was one of the DUP’s safest seats, and so it has remained. The outspoken MP Gregory Campbell, who has represented the constituency since 2001 – and is arguably best known for his controversial “curry my yogurt” comments on the Irish language in the Northern Ireland Assembly – was sitting on a majority of almost 9,000 votes.

In the event, he increased his winning margin by about 800 votes, although his share of the vote fell by about 8 percentage points.

The SDLP, which was celebrating a storming victory of more than 17,000 votes in the neighbouring Foyle constituency, also had a good night in East Derry. Its candidate, Cara Hunter, increased both her party’s vote share and its votes polled, adding about 1,700 to the party’s total from 2017 and leapfrogging Sinn Féin to take second place in the constituency by just 30 votes.

Aontú, which was standing in its first Westminster election, polled 1,731 votes.

In his acceptance speech, Mr Campbell challenged those who spoke of a decline in the DUP vote. “When those who try to analyse and say votes are down, I hope they will look at the vote we got in East Londonderry and see that our majority is up,” he said. “That’s because the people here want a hard-working, effective, hard-hitting MP who doesn’t pull any punches, and that’s what they will get in the next few years.

“We will wait to see the outcome, and hopefully all parties commit to get back to Stormont to make this country the best country in the United Kingdom and make it a much more prosperous country than we’ve had in the past.”

Asked by reporters ahead of his re-election if he trusted the British prime minister, Boris Johnson, Mr Campbell replied, “We shall see.” “There will be an onus on him to deliver on his issue of no checks east or west, and there will be an even bigger issue than that,” he said. “He has a call to make about how does he want to go down in history in terms of his premiership of the United Kingdom of England, Scotland, Wales and Northern Ireland.”