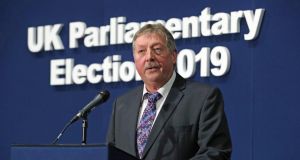 The DUP’s Brexit spokesman, Sammy Wilson, called for the restoration of the Northern Ireland Assembly in his victory speech after he was returned for East Antrim.

Mr Wilson, who has held his seat since 2005, won comfortably, although he saw his majority drop after a strong showing by the Alliance Party’s candidate, Danny Donnelly. Mr Wilson had a majority of close to 16,000 in the 2017 election, but that lead dropped to just over 6,700 in this contest. Mr Donnelly polled 10,165 votes, compared with the almost 6,000 votes won by the Alliance candidate, Stewart Dickson, two years ago, again reflecting the “Alliance surge” that was a feature of this election.

The new leader of the Ulster Unionist Party, Steve Aiken, who is a Northern Ireland Assembly member for South Antrim, challenged Mr Wilson, but his result was disappointing. He won 5,475 votes, coming well behind both Mr Wilson and Mr Donnelly.

Mr Wilson called for the reinstatement of the Northern Ireland Executive and Assembly. “I pledge that, in the forthcoming session of parliament, first of all, during that time, as a party we will do our best to restore the Assembly so that decisions can be made,” he said.

“And if Sinn Féin’s intransigence in locking the doors of Stormont to stop good things happening to Northern Ireland continues, then we say to the British government, either bring in direct rule or change the rules to keep the shirkers out and the workers in.”

Mr Wilson praised his party colleagues Nigel Dodds and Emma Little-Pengelly, who lost their House of Commons seats, saying they had carried out “sterling work for Northern Ireland”.