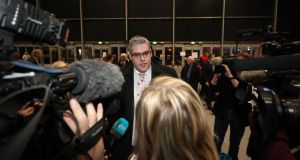 The victory of Gavin Robinson was an important one for the DUP. Had the Alliance Party leader, Naomi Long, triumphed as she did against the former DUP leader Peter Robinson in 2010 it would have meant no unionist representation from any of the four Belfast constituencies in the House of Commons.

That did not happen, but still Mr Robinson was tested by Ms Long. He took the seat back for the DUP in 2015 by a majority of almost 2,600 votes, consolidating his position two years later, when his majority increased to more than 8,400 votes.

He was expected to again increase or hold his majority, but instead Ms Long, an MEP, reduced his majority to 1,819 votes, making Belfast East vulnerable come the next Westminster poll, when Belfast may yet return no unionist representative.

Mr Robinson paid tribute in his acceptance speech to Nigel Dodds and Emma Little-Pengelly, who lost their seats, in Belfast North and Belfast South. “I will miss them and Westminster will miss them,” he said, adding that the political challenge was to get “Northern Ireland moving forward again”.

In the early hours of this morning Ms Long said that it was her birthday and that, although she did not win Belfast East, the great present she got was to hear that her deputy leader, Stephen Farry, had won in North Down.

“I believe that right across Northern Ireland people have voted for change. They have demanded better,” she said. “We want to build a united community. That is what we stand for in every election.”

Ms Long added that this election had been a really good one for the Alliance Party, as it made significant gains in many constituencies, and that she was hopeful for the future.

She said people had clearly said they wanted the Northern Ireland Executive and Assembly restored. “They were clear about that on the doorstep. What worries them are things like health and education, and we have a duty now to make it work. All of the parties have been sent individual messages about it.”