The inter-party talks due to start on December 16th may lack enthusiasm. Yet for the DUP, and a reluctant Sinn Féin, trudging back to the table seems the only way ahead 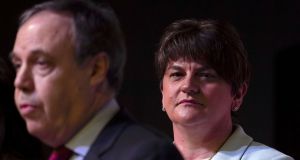 Unlike most Northern elections, this one is hard to read. During the campaign the DUP has scarcely mentioned Brexit, having alone among the main parties supported Leave then been “betrayed” – their word – by Boris Johnson’s proposed withdrawal deal. Their sense of humiliation is obvious.

Sinn Féin, the second largest party, has also had a bad spell, its loss of direction eased only slightly by the byelection victory in Dublin Mid-West. The border poll they crave is beyond consideration in both Dublin and London for the foreseeable future. But the DUP is more likely to suffer at the polls. The unpublished report into the Renewable Heating Initiative scandal hangs over party leader Arlene Foster. Renewed Westminster relevance depends on another hung parliament, an outside chance. They need a restored Stormont. Sinn Féin could also do with the focus that the Northern Assembly provides.

Meanwhile, thanks to unprecedented open cooperation with the SDLP, their despised rivals, next Thursday Sinn Féin just might take DUP deputy leader Nigel Dodds’s North Belfast seat. The SDLP in turn is well-placed to eject the DUP in South Belfast. Party leader Colum Eastwood may even “take back” John Hume’s old seat in Foyle, from Sinn Féin. The SDLP are not standing in North Belfast, SF returning the favour in South Belfast. Nationalists deride the unionist accusation that this is a pan-nationalist, Catholic pact; unionists traditionally depict such actions as merely sensible not to “split” the Protestant vote.

Brexit, and DUP behaviour, have made the weather this election season. Northern Ireland voted Remain in 2016 by 55.8 percent. Belfast had a Remain majority in three of the city’s four constituencies, yet the DUP currently holds three of its four seats. Belfast Lord Mayor John Finucane should unseat Dodds and the SDLP’s Claire Hanna could well defeat Emma Little-Pengelly in South Belfast. Both will be widely seen primarily as punishment for the DUP, for their relish in holding power at Westminster and lack of judgment in trusting Boris Johnson.

Their Brexiteering at Westminster, plus their harsh opposition to abortion provision and same-sex marriage, clearly did unionism no favours. There has been no sign that Johnson cares for any facet of Northern Ireland, nor at all about the DUP. Yet their voters see nowhere else to turn; Ulster Unionism is a diminished force, uncertainly led. Sinn Féin’s abstentionism seems perverse to some northern nationalists. But there is more anxiety among unionists, with worries that Brexit could well damage the northern economy and most of all the Union.

The inter-party talks due to start on December 16th may lack enthusiasm. Yet for the DUP, and a reluctant Sinn Féin, trudging back to the table seems the only way ahead.

1 Teenage boy dies at Powerscourt Waterfall in Co Wicklow
2 Fresh investigation into the murder of Michaela McAreavey in Mauritius
3 ‘There were times I had to step outside to hide my tears, take deep breaths and then carry on’
4 Coronavirus: 50 new cases as Glynn says phase four delay disappointing for many
5 ‘I wandered around Dublin wondering: Is this what they call a capital city?’
Real news has value SUBSCRIBE