Lack of storage and staff will stall State document release 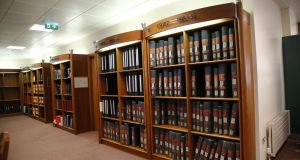 National Archives on Bishop Street: A lack of space means it relies on the Office of Public Works for temporary storage for documents when yearly releases are made. Photograph: Nick Bradshaw

Only a fraction of confidential State documents from 1989, which are due for release under the 30-year rule, will be available to the public because of insufficient storage facilities and staff shortages at the National Archive.

The difficulties also mean that a 2018 law providing for earlier release of State papers does not look feasible into the foreseeable future.

Papers from Government departments dating from 1989 will be made available to the public from January. The keeper of Archives and Government Services, Helen Hewson, said that because of a lack of storage it is only in a position to receive 800 of 2,500 boxes of archival material.

In a statement, Tom Quinlan, the acting director of the National Archive, said due to the “temporary unavailability of sufficient storage space, the archive was able to accept only a limited number of transfers of 30-year-old records”. There is no available space in the archive’s current premises on Bishop Street in Dublin and it relies on the Office of Public Works (OPW) to source temporary storage facilities for its documents when yearly releases are made. However, the OPW was unable to find temporary storage space in time for this year’s release.

“Until such time as the OPW is able to provide the National Archive with additional storage for archives offsite in commercial storage, the institution is unfortunately unable to accept transfers of 30-year old records,” said Mr Quinlan.

The scaling-back of transfers has been compounded by staff shortages. The Fórsa trade union, which represents archivists, has recently published a report that found that only four of 61 State departments and bodies covered by the National Archives Act are up to date with their legal obligations to transfer records.

The report also identifies major shortcomings in the digitisation of records and the development of online access.

“This is largely due to serious staffing and skills shortages, a problem that will be exacerbated when a commencement order is signed to implement the 20-year rule, due to replace the current 30-year arrangement. Although this will result in additional work, no extra staff have been hired.”

The report finds the archive’s staff numbers are 25 per cent below the number identified as necessary.

The National Archive Act was amended in 2018 to reflect changes in Britain where a new 20-year rule is already being phased in. That has resulted in state papers on Anglo-Irish relations from the North and London being made available years in advance of Ireland. In the new year, British papers from 1995 and 1996 will be released. Ms Hewson said that, by next year, Ireland would be lagging behind Britain by nine years with no guarantee the phasing-in of the 20-year-old rule would begin.