Minister warns against large corporations ‘muscling in’ on bingo sector 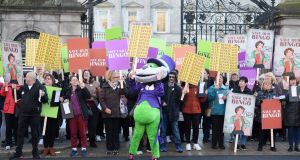 Protesters against Government plans for bingo outside the Dáil on Tuesday. Photograph: Dara Mac Donaill

Glitzy and professional bingo businesses would “muscle in” on community events if commercial bingo was allowed in the State, Minister of State David Stanton has warned the Dáil.

He told TDs that under current law commercial bingo is not allowed and anyone running a bingo operation, however big, “must do so for a charity”.

Social Democrats TD Róisín Shortall said commercial bingo was already a “very big activity” in Dublin and operated in her Dublin North West constituency and many other areas.

She said these operations were “not in any way philanthropic” but she claimed it was a commercial activity and legitimate and it should be regulated and distinguished from operations run on a charitable basis.

Mr Stanton acknowledged that there were what he termed “semi-commercial” operations in place but he insisted that they must be run for charity.

But he said that commercial operations such as those in Northern Ireland or Britain “could muscle in and close down the small operators”.

Commercial bingo on this scale would mean large corporations, “perhaps multinationals” and wealthy businesses. He said there had been a previous attempt to do this in Ireland which resulted in “much concern from small organisations and clubs”.

The big issue is the percentage the charity should get, he said during debate on the final stages of the Gaming and Lotteries (Amendment) Bill.

In a lengthy discussion on the percentage of takings to go to charity and to prize winners, Mr Stanton accepted an amendment by Sinn Féin TD Martin Kenny and seconded by Independent TD Denis Naughten that the organisers of large or “monster” bingo contests could pay up to 75 per cent of funds in prize money.

The Government’s preference had been for a cap of 50 per cent, and the Minister said operators could always top up prize funds themselves. However, he insisted and the House accepted that bingo operators would have to donate 25 per cent of funds to charity.

Earlier in the week, more than 100 bingo operators and players, mainly women, protested outside Leinster House under the campaign banner “Save our Bingo” over fears that bingo halls could be shut down because of the legislation.

But Mr Stanton, who accused a “major professional lobbying campaign” of attempting to derail the legislation, said the vast majority of community bingo operations would not be affected.

In bingo games where the total prize money is less than €5,000, there is no change to the law. No permit is required for a prize fund of €1,000 but under current law clubs and events are expected to apply for a Garda permit.

For funds of €5,000 to €30,000 operators are currently required to seek a District Court licence but while they had to specify a charity they did not have to specify an amount of donation.

The only change in the law is that they will be required to give a quarter of the fund to charity, Mr Stanton said.

The Bill now goes back to the Seanad.