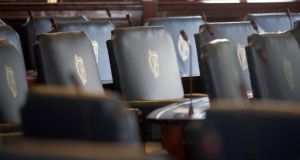 Labour claims a Seanad rule change would allow House to sit without the Taoiseach’s 11 nominees. File photograph: The Irish Times

The Labour Party claims a change in Seanad regulations will allow a newly elected Upper House to sit without the Taoiseach’s 11 nominees.

The party may propose this rule change, but its view contradicts that of the Government, which insists the new Seanad cannot operate unless all 60 Senators are in place.

The outgoing Seanad convenes on Friday for the final time to debate the emergency measures passed by the Dáil last night giving the Government extra powers to combat the Covid-19 pandemic.

But before the legislation is debated Labour may submit a proposal to change standing orders, the Seanad’s internal rules of procedure.

The party’s Seanad leader, Ivana Bacik, reiterated legal advice that the only obstacle allowing a new Seanad to operate was current standing orders.

The Government has insisted, however, the Emergency Measures in the Public Interest (Covid-19) Bill must be passed by both Houses before the weekend because it believes the new Seanad cannot sit until 11 nominees appointed by a new taoiseach are in place. Acting Taoiseach Leo Varadkar is not empowered to choose them.

On Monday Secretary General of the Government Martin Fraser warned Dáil party and group leaders of the constraints on legislation.

Some Cabinet members took this as a challenge to party leaders to form a new government, and talks are progressing between Fine Gael and Fianna Fáil.

But Ms Bacik said last night the advice of the party’s legal adviser, Finbarr O’Malley, had been echoed in an opinion piece on Thursday by constitutional law academics Prof Oran Doyle of Trinity College Dublin and Dr Tom Hickey of Dublin City University.

They stated that Article 18 in the Constitution relating to the Seanad is open to different interpretations.

The Constitution provides that the Seanad is composed of 60 members, 49 elected and 11 nominated by by the Taoiseach appointed after a Dáil general election.

But the two academics have said the Constitution does not require the Taoiseach to nominate the 11 before the first meeting of the Upper House after a Seanad general election.

They also said the Constitution allows the outgoing Taoiseach to convene the first meeting of the Seanad.

“If the Seanad can be convened before the Taoiseach’s nominees are in place, then the Oireachtas is fully constituted and legislation can be enacted,” they said.

Mr Varadkar warned of the risk of legal challenge to legislation passed without all 60 Senators being in place.

But the constitutional law academics said the risk was “very low” because any legislation remained valid until successfully challenged, and if that occurred the courts had “developed a flexibility in their remedies” to suspend declarations of unconstitutionality for up to 12 months to allow the Oireachtas to address the problem.